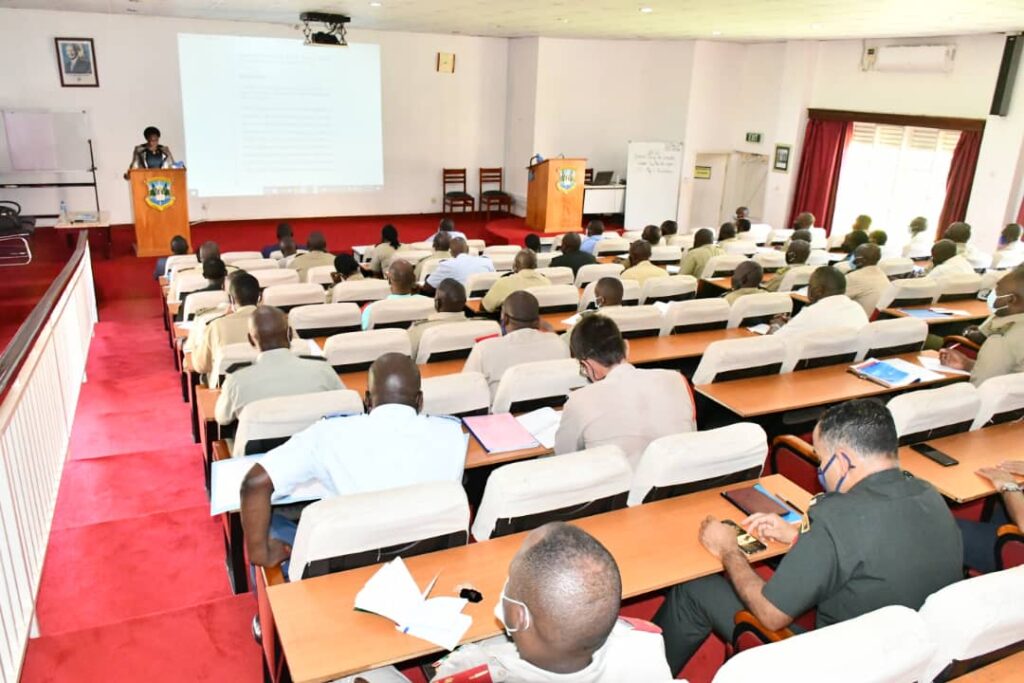 The Government of Uganda is committed to achieving the goal on gender equality and women’s empowerment due to the numerous benefits realized under the current Gender Policy.
According to the Minister for Gender, Labour and Social Development, Hon. Amongi Betty Ongom, the Gender Policy has been a critical advocacy tool in lobbying for the inclusion of gender concerns in development programmes and projects.
While delivering a lecture before senior military officers at the Uganda People’s Defence Forces Command and Staff College, Kimaka in Jinja on Wednesday, Hon. Amongi revealed that several Ministries, Departments and Agencies had developed gender policies and Strategies in line with their sectors.
She singled out the Ministries of Education and Sports; Water and Environment; Public Service; Defence and Veteran Affairs; Energy and Mineral Development; Uganda Police Force; Uganda People’s Defence Forces, the Justice Law and Order Sector; and Lands among those with specific gender policies or strategies.
She demystified the common myth that gender refers to women and girls only; and explained that it refers to the relations between women and men in as far as roles, responsibilities, access to resources, constraints, opportunities, needs, perceptions and views are concerned.
“Meanwhile Gender Equality is the equal valuing by society of the similarities and the differences of men and women, boys and girls, and the roles they play from an economic, social, cultural and political development perspective.” She added.
On the other hand, she defined Gender Equity as fairness of treatment for women and men, according to their respective needs, including the equal treatment or treatment considered equivalent in terms of rights, benefits, obligations and opportunities.
The third concept she defined was Gender Mainstreaming, which she referred to as a strategy for making women’s as well as men’s concerns and experiences an integral dimension of the design, implementation, monitoring and evaluation of the policies and programmes in all political, economic and societal spheres so that women and men benefit equally, and inequality is not perpetuated.
“There is now a general appreciation among policy makers and planners that participation of both women and men in development processes is not only a social and human rights concern but that it also makes economic sense.” The Minister noted.
Some of the key statistics she attributed to the gender policy included: affirmative action in public Tertiary institutions and Universities which increased enrolment of females from 36.7% in the year 2000 to 44%in 2013 while in 2002 ownership of registered land by women was only 7% which increased to 39 percent in 2017 as per data from the Land Information System.
The 9th and 10th Parliaments had a Woman Speaker, the first in the history of the Country elected in 2011 and re-elected in 2016. In addition, the 10th Parliament had the first female Leaders of the Opposition. And recently, Rt. Hon. Anita Among was elected as a Speaker of Uganda’s Parliament becoming the second woman to hold this position.
In Cabinet, the number of Ministers increased from 14 (19.4%) in 2006 to 26 (49%) in 2016. Currently there are 37 women Ministers which is almost half of the total at 45% while the women Permanent Secretaries comprise 48.5 percent.
In the recent Parliamentary Elections 175 Women were elected as Members of Parliament. Of these 146 are District/City Women Representatives, 13 are Representative of Special Interest Groups and 16 are directly elected. This gives us a percentage of 34% which is still above the critical mass (30%) of women in the legislature.
The Minister revealed that with the emerging issues on the local and global scene, the Gender Policy that was developed in 1997 and last reviewed in 2007, would be soon reviewed.
The lecture was attended by over 40 military officers from the East African Community member states.