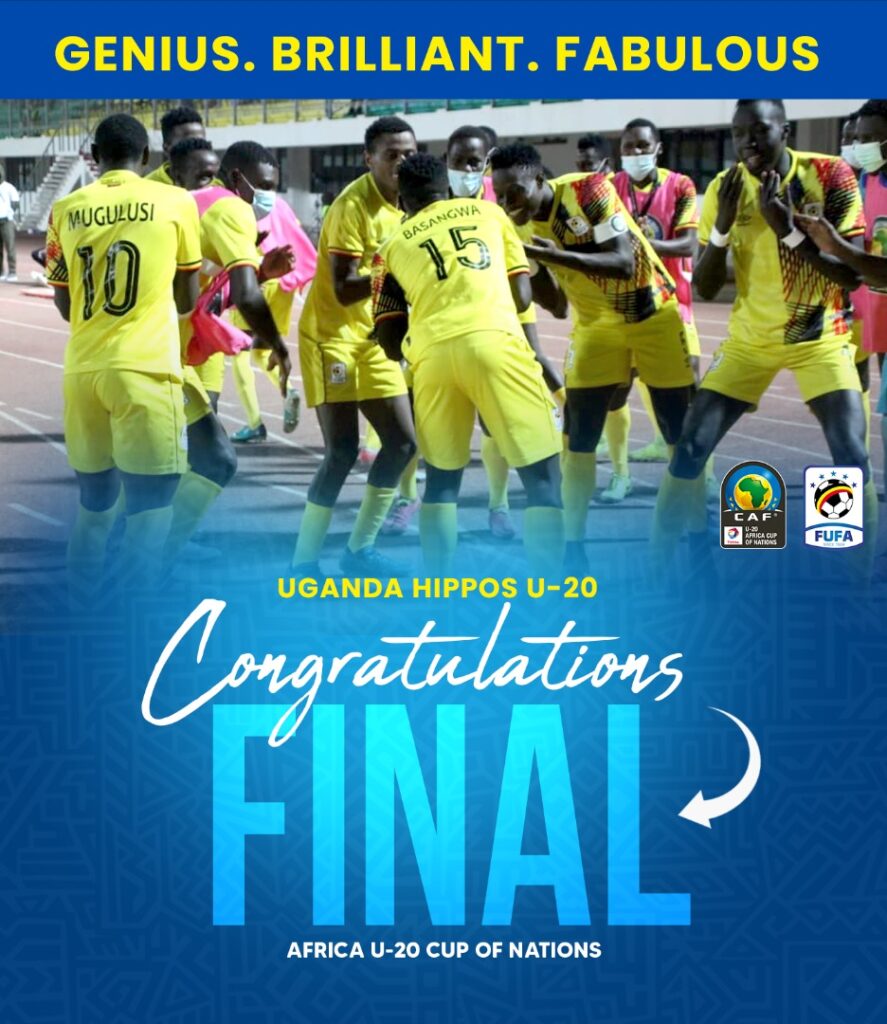 Derrick Kakooza starred with an hat-trick to lift Uganda into the final of the AFCON U20 Championship after a commanding 4-1 win over favourites Tunisia.

Uganda will face Ghana in Saturday’s final, in a repeat of the 1978 AFCON final when the respective senior sides met at Accra Sports Stadium before the hosts ran away 2-0 victors.

Kakooza, who was one of the two changes made by Morley Byekwaso from the team that started against Burkina Faso in the quarter finals, goes top of the leading scorers chart with five goals.

Richard Basangwa set the tone when he freed himself thanks to a little dink in the box over Mohammed Aziz Guesmi before firing low past the goalkeeper.

Basangwa later turned provider when he beat his man on the left before laying for Kakooza who bundled home at close range.

Tunisia halved the deficit courtesy of Adam Karim Benlamine who scored after goalkeeper Jack Komakech’s save ricocheted off him from the frame of the goal.

Kakooza restored the two-goal advantage in the second half when he made a clever run into the area to head over the goalkeeper thanks to a trademark long ball from Bobosi Byaruhanga.

He grabbed his hat-trick after he was freed by Basangwa to fire a tame shot that crept under the goalkeeper and crawled across the goal line as the Police striker wheeled away in celebration.

Whatever Saturday result will be, the Hippos will be the talk of the tournament.

His becomes the first player, and set to be the only one, to score a hat-trick of the tournament.

The Hippos have played as a team throughout, and despite sitting back few moments against Tunisia, they later got out of their shells and took the ball to their opponents.

Byekwaso suffered a blow when Najib Yiga was stretchered off, but he will be confident that the available players will be able to get the job done.

Basangwa’s goal was a thing of beauty in terms of skill and he later showed his power and pace to beat his man for that assist to Kakooza to double the lead.

Musa Ramathan and Kenneth Ssemakula were equally good in the centre back, against taller opponents and you can’t blame them for that goal either.

Isma Mugulusi came close to registering his name on the score-sheet but his long range drive rattled the crossbar with the keeper rooted on the ground.

Komakech in goal was rarely troubled, but he showcased his ability when needed the most to pull a one-hand save to deny Zied Bierrima as the Hippos took a 2-1 cushion at the break.

The Tunisians continued to press high, and almost leveled when Guesmi cross was headed over by substitute Hamdi Abidi.

The Hippos fullbacks of Gavin Kizito and Aziz Kayondo attacked and defended in equal measures, giving the team the needed balance wide of the pitch.

Bobosi was very composed in the middle of the park and made his presence felt later on when he picked Kakooza with a long pass to head home the third.

Kakooza’s hat-trick was sealed with a bit of luck when he ran free on goal and forced a weak shot to wobble past a helpless keeper.

Bogere could have had a say but sent his effort over the bar after he cut from inside.

Ssemakula made a last ditch tackle to deny Mootez Zadem at the other end, as the Hippos marched on to the final in style.

Uganda has never won any continental silverware in football, and the final on Saturday provides the nation’s biggest chance.

The fans back home have found solace in this Junior sides after the Uganda Cranes poor show recently – The CHAN team failed to pass the Groups while the senior team lost to South Sudan in Kenya.

Morley Byekwaso and his boys have already punched above their weight and will have nothing to lose but will seek to leave a mark on their debut final appearance in the competition.

A 2-1 incredible comeback against hosts Mauritania to finish second in Group A handed the Hippos a ticket to the knockout and later defied odds with a shootout victory over a much fancied Burkina Faso.

Earlier in the groups, Cameroon had brought the Hippos down, days after they had set the tone with a 2-0 win over COSAFA U20 Champions Mozambique.

Against Ghana, the Hippos will however fancy their chances against a team that finished third in Group C, eliminated Cameroon via shootouts and needed a lone goal from Percious Boah to overcome minnows Gambia in the semis.