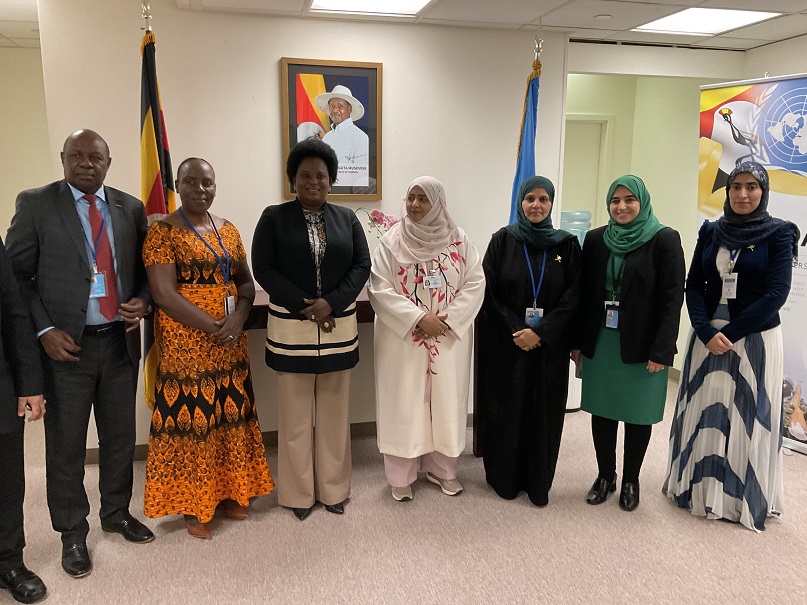 Uganda Ahead of the World in Gender Equality- Minister Amongi
The Government of Uganda has made tremendous progress in advancing gender equality and women empowerment as a key driver of inclusive economic growth and social development.
While presenting a paper at a dialogue held on the sidelines of the ongoing 66th session of the Commission on the Status of Women in New York on Thursday, the Minister for Gender, Labour and Social Development, Hon. Amongi Betty Ongom observed that a host of progressive laws, policies, programmes and interventions had been instituted to support the drive.
“As a country, Uganda has entrenched a clear belief system which recognizes that societies where women and girls are treated as inferior to men and boys are a recipe to establishing and perpetuating a vicious cycle of limited education, poor employment opportunities, ill health, forced marriages and all too frequent violence and exploitation.” Amongi said.
She added that more attention had been directed to eliminating cultural and religious practices that subjugate women and perpetuate multiple forms of discrimination, oppression and violence.
She called for studies on how to liberate women who remain custodians of protecting and reinforcing such practices.
The Minister however decried the slow progress at global level noting that of the 72 million children of primary-school age still excluded from school systems, two-thirds are girls while women hold only 18 percent of the world’s parliamentary seats and throughout the world, too many women live in fear of violence.
“In too many countries, policies, legal frameworks and social justice systems are just not adequate. Of all the Sustainable Development Goals, the one where we have achieved least success is on maternal health,” she noted adding, “Each year, between 10 to 15 million women suffer long-term disability due to complications during pregnancy or childbirth. Every year, more than a million children are left motherless”.
The Minister said the Gender Ministry in Uganda is prioritizing economic empowerment for women because research has shown that women face greater hurdles than men in almost all spheres of economic activity including; access to finance, assets, technology, good-quality jobs and peer-to-peer networks.
She pledged to develop a comprehensive approach to reducing gender inequality, repealing laws that discriminate against women and girls, increase protection against violence, close the gap in girl’s education and digital technology, guarantee full access to sexual and reproductive health services and rights, and end the gender pay gap.
“We are making sure that women have equal representation in peace processes, and strengthen our work on the links between violence against women and international peace and security,” She added.
Amongi was optimistic that women’s equal leadership and participation is fundamental and with the quotas that have been in implementation, there is a growing shift in balance of power and that dividends are starting to show towards gender parity in Government, Parliament, Corporate Boards and Institutions across the world.
“We are now moving to a very exciting time in history where the world now expects diversity, equity and inclusion. The world notices its absence and celebrates its presence.” She observed.
Meanwhile, the Minister has held bilateral meetings with Ministers and executive officials from South Africa, UN AIDS, Oman and Norway on a cross section of issues.
The discussions revolved around the need to increase peer-to-peer learning programmes between Uganda and South Africa. The South African Minister for Women, Youth and Persons with Disabilities, Hon. Maite Nkoana-Mashabane also pledged more cooperation on Gender and Equity budgeting as key empowerment strategies for women and girls.
The Norwegian State Secretary for International Development, Bjorg Sandkjaer pledged more financial support to Uganda in areas of sexual and reproductive health for pregnant girls, the elimination of Female Genital Mutilation and the gender equality programming.
Oman pledged to work closely with Ministry of Gender, Labour and Social Development to ensure that Ugandan girls working as housemaids are safe and their rights are protected while the UNAIDS Africa Director, Anne Githuku-Shongwe pledged collaboration with Uganda on scaling up the campaign for reduction of HIV infections arising from the COVID-19 impact, especially among young girls.