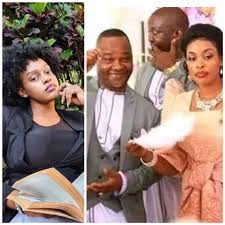 Masaka city property Mogul Lwasa Emmanuel has left many guessing what is next after shockingly being introduced by a mystery woman leaving his known ‘sugar girls’ cursing. This is after photos of him being introduced by his new wife in Luwero emerging on social media.

The photos show an unbothered and happy tycoon with his young and beautiful wife at their introduction ceremony which took place on Saturday 27th February, 2021 in Luwero. The development comes just weeks after the tycoon openly denounced his undercover lover, a one Diana Nabatanzi claiming there was nothing romantic going on between them.   Lwasa’s introduction caught many off guard.  A seemingly unbothered Lwasa doled his new catch with a brand new Mark X  of the UBJ series.