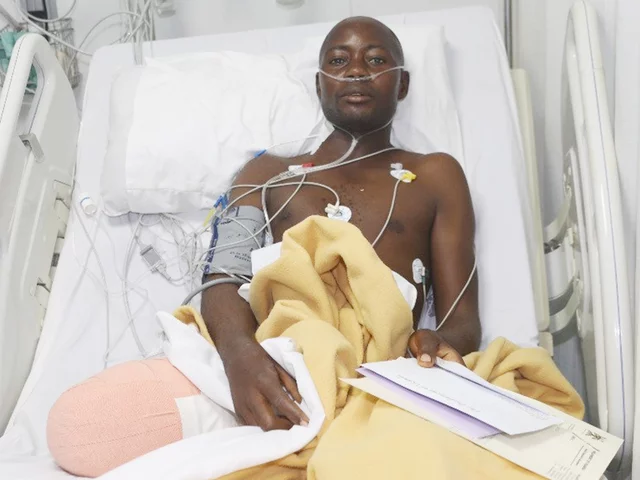 The traffic police officer who was shot on Sunday evening by a UPDF soldier has been amputated at Victoria hospital in Kampala after the bullet shattered his left leg.

Mukebezi was shot in Ntinda while trying to tow a Toyota Prado TX military vehicle with registration number H4DF 1391 that had been involved in an accident.

Meanwhile, Police and the UPDF are still searching for the suspect who they say is still on the run.

The shooting of Mukebezi has since been condemned by many including Internal Affairs Minister, Maj Gen (Rtd) Kahinda Otafiire who on Tuesday, said the perpetrator will be brought to book.

Robert Mukebezi’s family members are seeking justice; they want the updf to be apprehended. The traffic policeman had responded to an accident in Naalya, when he was shot as the military vehicle involved in the crash was towed away on Sunday.

Three years ago Esther Namaganda, a Uganda Police Traffic Officer at a rank of sergeant, was assaulted by General Matayo Kyaligonza at Seeta trading center along Jinja road, the case was taken to Mukono court but General Kyaligonza refused to appear before Court.

Warrants of arrest were issued against him still with impunity the General refused since then the disappeared in thin air living Sgt. Namaganda a disappointed woman.