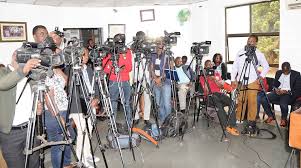 Earlier on, the EC had issued regulations directing all journalists who want to cover the presidential elections to first register with the UMC and acquire accreditation therefrom before they could be allowed by the police to cover the elections.

However, the latest development is that this regulation has since been set aside, whereby all journalists have been allowed to cover the elections so long as they abide by the Minimum Broadcasting Regulations and observe the Ministry of Health Standard Procedures of Operation (SOPs).

Information that has just landed on our news desk indicates that journalists who have not re-registered will be free to do their expected duties during the elections, without fear of arrest as the Uganda Media Council had directed in a circular to police all over the country.

In the latest circular by the EC Vice Chairperson Hajjat Aisha Lubega to city and district returning officers, the commission has issued guidance on the criteria needed to accredit journalists who wish to cover the forthcoming general election.

According to the circular, all journalists who wish to cover the electoral process will be granted access as long as they have identification from their media houses.

“Media personnel will only be required to present a valid identification/press cards issued by their media houses, in order to access the polling stations and respective district/city tally centres,” the circular reads in part.

However, each returning officer is told not to allow more than two reporters from one media house to comply with the COVID-19 standard operating procedure.

The EC’s communication brings to an end the long-running standoff between Editors and the Media council over the contested registration requirement.

While the media council had directed that police arrest any journalist found covering the elections without accreditation, the editors question the legality of the Media Council in the first place since it is not lawfully constituted.

As such the editors went to court seeking an injunction against a directive by the apparently unlawful body.

In December last year, the Electoral Commission had issued a statement indicating that the press would be required to prove that their registration status with the respective regulatory authorities before being accredited to cover the polls.

The statement came at the backdrop of the Media Council of Uganda’s directive requiring all Journalists, both local and international, to register within seven days, for accreditation.

Since then, there has been a heated debate on timeliness, justification, and relevancy of the Media Council, which media scholars and experts say is working illegally as it is not fully constituted as the law requires.

The Uganda Editors Guild, an umbrella body that brings together Editors, senior journalists, and Scholars of Journalism, petitioned the court seeking an order to restrain the media council and security organs from illegally and irrationally curtailing media and press freedom of journalists to cover the 2021 general election and other state events. Court had set January 10 to pronounce itself on the matter.

Robert Ssempala, the National Coordinator of Human Rights Network for Journalists-Uganda, says the development gives hope to journalists since the said accreditation by the media council had a series of challenges including rejection of some journalists’ applications.

“Changing the rules of engagement in the middle of the process was not fair at all. We can only commend the Electoral Commission for this new development which we think will preserve media and individual journalists’ rights,” said Ssempala.

Alex Atuhaire, a member of executive of the Uganda Editors’ Guild, noted that the Electoral Commission has taken the right decision.

He, however, said that the move is not related to their petition filed in court, where the editors’ guild is challenging the Media Council’s illegal, and irregular registration and accreditation process which has far-reaching consequences even beyond the coverage of elections.