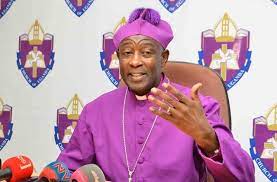 The Archbishop of the Church of Uganda Stephen Kaziimba Mugalu has appealed to journalists constantly be ethical while reporting stories.
As journalists in Uganda celebrate World Press Freedom Day, which is marked on May 3 annually.
In his message, Kaziimba said that the Church of Uganda recognises the role of media in evangelism however, he tasked journalists to ensure that ethics are followed to the dot to avoid staining their reputation.
“On this World Press Freedom Day, may we renew our commitment to freedom of the press. I encourage media professionals to remain ethical, accurate and balanced in their reporting,” Kaziimba said. Adding: “The Church of Uganda acknowledges the role of the media in evangelism and community transformation.”
The day comes at a time when several reports indicate a rapid narrowing operational space for journalists in Uganda and internationally.
According to the United Nations, the day acts as a reminder to governments of the need to respect their commitment to press freedom.
It is also a day of reflection among media professionals about issues of press freedom, professional ethics, and as well as a day of remembrance for those journalists who lost their lives in the quest of stories.