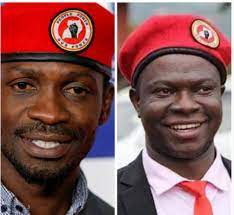 The leader of the National Unity Platform (NUP) Robert Kyagulanyi Ssentamu also know as Bobi Wine has said that the Kawempe North MP Muhammad Ssegirinya has told him that the state workers have on several occasions, coerced him to denounce his party (NUP) and apologise to President Yoweri Museveni, if he wants to regain his freedom.
Kyagulanyi made the revelations after visiting the bedridden Ssegirinya at Mulago referral hospital to ascertain his current state of health.
He said that the legislator’s health condition is worrying. “He has complained of excruciating pain in his foot, and breathing difficulties. We have learnt from him that several state operatives and politicians keep frequenting his treatment room and harassing him to apologise to dictator Museveni and denounce the struggle or else he will not be freed from his misery.”
Ssegirinya was rushed to Mulago national referral hospital after his health condition worsened while in Kitalya prison.
According to the spokesperson of the Uganda Prisons Service, Frank Baine, the legislator was rushed to Mulago hospital on Friday.
Kyagulanyi criticized the government for the continued detention of the sick MP saying if anything happens to him, it will be the government to blame
Ssegirinya and Makindye West MP Allan Ssewanyana were charged with murder, inciting violence and terrorism following machete killings in the greater Masaka region in the months August and September.