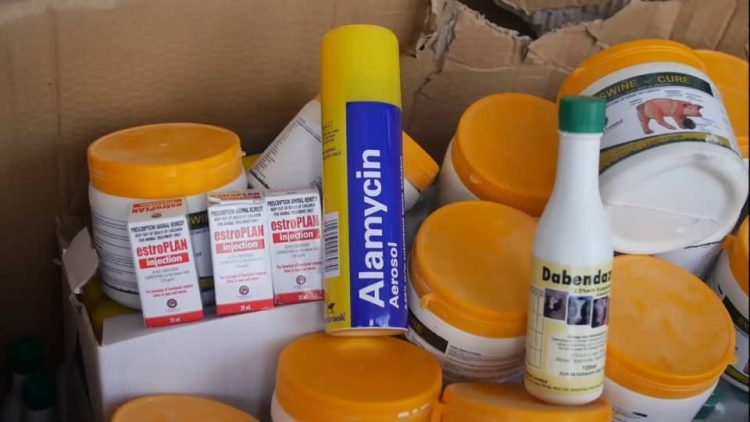 The National Drug Authority (NDA) together with police have arrested a suspected illegal drug dealer in Namisindwa district following traces from her retail agents in Busoga and Mbale areas.
The human and animal drugs are said to have been smuggled from Kenya through the porous borders and adulteration before being distributed to retailers across the region.
Eunice, (other name reserved) was found in her village in Bubutu Town council Namisindwa district following leads from her retail agents who were also found in possession of the drugs.
Samples of counterfeit acaricides with Kenyan labels were recovered from her parent’s home in Sabino parish, Bukiyabi Sub County, Namisindwa district where it is suspected she operates from.
On Saturday, NDA arrested a one Patrick, a retail animal veterinary drug shop operator in Mbale town following a lead in Bugiri.
“We found suspected counterfeit drugs in a drug shop in Bugiri when we put the operator on pressure, he produced a purchase record which led us to MHK drug shop in Mbale,” he said.
Dr. Richard Kiriwajo from NDA said such drugs compromise the safety of the unsuspecting users in addition to the un guaranteed effectiveness due to their unverified compounds. “We have found that these acaricides are not registered by National Drug Authority so we don’t know which molecules are in there, and that alone makes it unsafe for use.”
“If these drugs are used on animals, they find their way in the food value chain adding that some drugs that do not meet the safety and efficiency test are smugglers into Uganda and sold to the unsuspecting public” he added