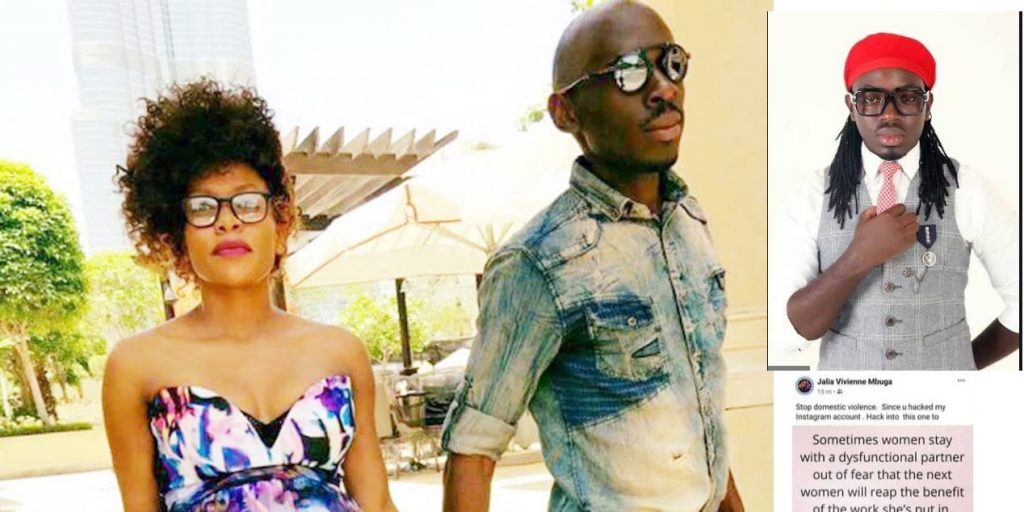 There is a bitter love wrangle raging on between socialite Suleiman Kabangala alias SK Mbuga, his wife Jalia Vivienne Birungi Mbuga and his brother-in-law  Hakim Kibirige aka Kim Swagga.

The war between these people could soon turn deadly after Kim Swagga accused SK Mbuga of allegedly threatening to kill him several times.

However, the most affected victims in this sex wrangle is Jalia, who  complains to pals that Mbuga has since turned her into a punching bag or drum that he allegedly beats  day and night.

On Sunday, SK Mbuga’s wife Jalia said that she has been a victim of domestic violence on several occasions, but decided to stay married to Mbuga out of fear that another woman can come into her marital home to enjoy her hard work.

“Sometimes women stay with dysfunctional partners out of fear that the next woman will reap out of the hard work she put in, nope,” she wrote on social media.

According to our Moles, the war between SK Mbuga and Kim Swagga has been raging on for some time until recently when he (Kim Swagga), came out recently and spilt it all in the media, when he wrote on his facebook wall, apologizing for ever linking up his sister Jalia with Mbuga.

Kim Swagga noted that he feels guilty for having introduced Mbuga to Jalia, because if it wasn’t for him, she wouldn’t have gone through such misery and torture that she is enduring currently in her marriage.

Kim also said that he knew what was happening in Jalia’s life but chose to remain silent because at one time Mbuga allegedly wanted to murder him.

“I have kept mute about your evil behaviors for a long time, even when you wanted to murder me, but the almighty God will work on you one day and trust me it will be a knock out. My sis Jalia Vivienne Mbuga, am sorry for introducing you to that man, I will forever take the blame,” Kim Swagga wrote on Facebook in reply to Jalia’s post on Sunday.

A few years ago Mbuga’s former lover Leila Kayondo, a celebrated musician, dragged him to police after be clobbered her to near death. Mbuga was then arrested by police in Kabalagala but after negotiations of catering for medical bills and settling the matter out of court he was released. Shortly thereafter his relationship with Leila came to a sudden end.

However, by the time of filing this story our efforts to reach Mbuga for a comment about this matter were still futile because he couldn’t be reached on his known phone numbers.

But we shall bring you his side in our next briefing and don’t to reads about how Mbuga hooked up with Jalia, why he she cannot leave him despite the beatings plus why he reportedly wants to murder Kim Swagga!