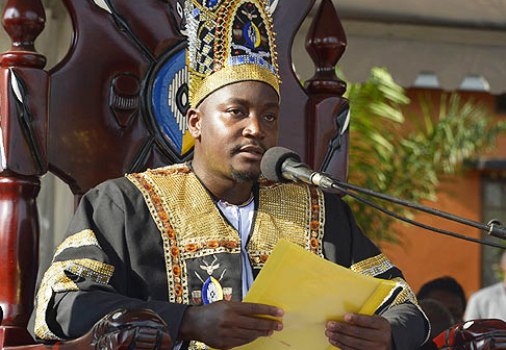 A section of Angry chiefs have explained why they took a decision to fire Busoga king Kyabazinga Nadiope Gabula IV, according to their January 03 notice and declaration.

According to Kawunhe Wakooli II, the chief of Bukooli chiefdom, one of the 11 chiefdoms which elect the Kyabazinga, all Basoga should know that as chiefs, they have chosen Edward Columbus Wambuzi Muloki of Bulamooji Chiefdom as the new Kyabazinga.

Kawunhe went ahead to say that Wambuzi had finalized plans of announcing his cabinet for his reign as the rightful Kyabazinga of Busoga.

Kawunhe also told the Basoga that it was the chiefs with the responsibility of electing the Kyabazinga and that they were now tired of how Gabula had turned the Kingdom into a hub of dishonest deals who pride in hypocrisy, and false accusations.

His other colleague, Ayub Banamwita Waguma of Butembe Chiefdom, accused Gabula of hypocrisy and of seeing himself as one who had made it in life.

That he had disrespected the chiefs and was trying to steal and misuse properties belonging to the chiefdoms.

Waguma accused Kyabazinga Gabula of claiming that the chiefdoms have no property of their own.

The chief of Butembe further accused Gabula of installing whoever he finds as a chief in their chiefdoms yet they themselves are still serving in the same capacity, something which he said causes more confusion.

He went on to accuse the king of addressing them while being guarded by the royal guard. So he says they’re fighting such behavior in Busoga and they’ve decided as Chiefs to give direction to the kingdom.

The chief also said that all factories in his Chiefdom of Butembe (Jinja) are not able to help them with Corporate social responsibility because they have been ordered not to do so and that only few people in the kingdom enjoy these services from factories.

For his part, Isiko Yokonia Kawanguzi of Busiki Chiefdom, who doubles as the head of the chiefs, noted that his colleagues resolved and instructed him to unveil to Busoga a new king.

The Kingdom of Busoga has dismissed as false a letter making rounds on social media indicating that the royal council of chiefs had fired Kyabazinga Gabula Nadiope and replaced him with Edward Columbus Wambuzi, the Zibondo of Bulamogi.

However in a statement issued this afternoon by the kingdom premier, Dr Joseph Muvawala, maintains that Nadiope is still their king adding that the purported dismissal letter is misleading, illegal, and intended at creating confusion and disunity in the kingdom.

He adds that once elected, the king reigns till death.

Muwavala has further asked the general public to remain calm and reassures that any similar developments shall be dealt with and managed.