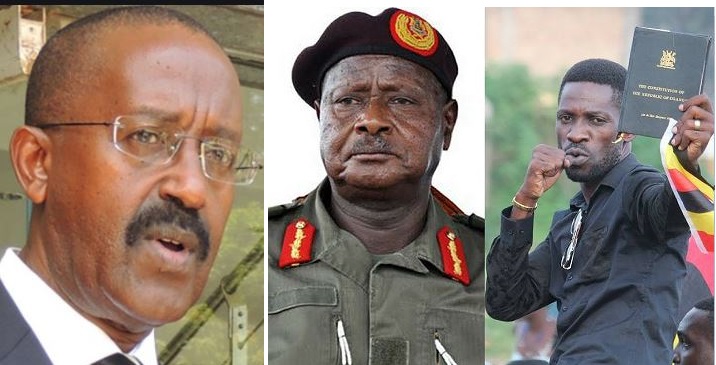 Shocking secrets why Sam Rwakoojo and several other Electoral Commission officials were fired early this week by President Yoweri Kaguta Museveni  have emerged.

According to reliable sources, Rwakoojo, who was the E.C Secretary, Jotham Taremwa, who was the publicist and others were shown the exit after they failed to explain to the Appointing Authority under what circumstances People Power presidential contender Robert Kyagulanyi aka Bobi Wine managed to buy National Unity Platform (NUP), without their knowledge.

Apart from Rwakoojo and Taremwa, the other E.C officials  who were fired include Godfrey Wanyoto, who was the Head Procurement, Charles Musuza, Edgar Kasigwa and Pontius Namugera (the ICT director

However, we have since established that on Tuesday at about midday, shortly after receiving information about Bobi Wine’s NUP, President Museveni called the E.C Chairman Simon Byabakama, on phone, during which he demanded for answers.

In the said phone call, after a lengthy discussion with Byabakama, Museveni reportedly said: “I don’t want those people, tell them to go away today!”

Whereas earlier reports indicated the group had been fired over corruption-related matters, a source inside State House intimated to this Website, that the failure by the EC officials to report to State House about Bobi Wine’s ‘suspicious activities’ of buying a new political party.

It is their negligence to inform the President and or ignorance about Bobi Wine’s clandestine political activities that could have played into their sacking, according to our Moles.

On Wednesday, Bobi Wine unveiled the National Unity Platform after he reached an understanding with Kibalama Nkonge of the National Unity, Development and Reconciliation Party (NUDRP), who had registered the party in 2004.

It should be noted that the EC under the law is mandated to supervise all political parties. Therefore whatever changes are made in the constitution of a political party must receive the express approval of the electoral body, hence Bobi Wine and Kibalama wouldn’t have reached an agreement without the Electoral Commission senior officials being aware.

According to the source, the President got wind that People Power founder, Bobi Wine had bought and changed a name of a party 11 months ago, but EC remained tightlipped about the matter until it was reported to him on Monday during a meeting with top National Resistance Movement (NRM) party officials.

We have been told that an angry Museveni is said to have sought further information and heard from more stakeholders before zeroing down on several people whose role is directly involved with the day to day running of the Commission and ought to have informed him about Bobi Wine’s move.

It should be noted that early last year, Bobi Wine developed the idea of transferring his People Power Movement into a political vehicle flagged by a party, after Balaam Barugahara and other people coming out to claim that they had registered People Power as a Non-governmental Organisation (NGO).

The idea which he kept a secret between him and his elder brother Fred Nyanzi, would later culminate into engagements with Mzeei Kibalama Nkonge of the National Unity, Development and Reconciliation Party.

Another party (Activists Party) was contacted but their symbol, a hand with three pointed fingers did not excite Bobi Wine and Nyanzi.

The duo then moved to consult a one Degaulle Kawuma for his party National Convention for Democracy whose symbol is a flying bluebird.

However, Kawuma’s party fell short of satisfactory requirements since it was already involved in a coalition to create The Parties Forum.

It should be noted that in September 2005, five political parties including National Convention for Democracy, Forum for Integrity Leadership, Liberal Democratic Transparency, National Progressive Movement merged to form The Parties Forum.

Acquiring Kawuma’s party would, therefore, prove cumbersome for Bobi hence zeroing down on Kibalama’s (NURDP), whose symbol is a blue umbrella.

It is said Bobi Wine started preparations for changing the party from NURDP to National Unity Party, plus changing in colors and the symbol which he successfully handed over to the Electoral Commission for gazetting.

According to the Political Parties and Organisations Act 2005, anyone intending to change names, party symbols are required to write to the EC within 21 days of which the EC will place include the mater in the gazette for 14 days before confirmation of changes.

Bobi Wine’s changes were ‘quietly’ approved by the EC on July 29th, 2019, and fully confirmed on August 12th the same year.

However, since then, the EC remained tightlipped about the matter, to the much annoyance of the President who has since lost trust in many cadres at the Commission.

Political pundits argue that it is not possible that Bobi Wine managed to undertake the process of buying, registering and fully acquiring a new party through the Secretary of EC Rwakoojo, and Data Base specialists also didn’t learn about the matter, as well as the Commission’s Spokesperson Taremwa and boss Byabakama until this week when he launched it.

“It is strange how Bobi Wine managed to infiltrate the EC to that level, unless there was some inside job,” the source said.

It is thus no coincidence that  Museveni fired the EC officials on Tuesday evening and on Wednesday morning, Bobi Wine launched his party!

On the other hand, people inside Bobi Wine’s camp were taken by surprise after the presidential hopeful summoned them for the event abruptly.

Despite having been fired, the storm is not yet over for Rwakoojo, Taremwa and group. We have since established that they are all under investigation by Lt. Col. Edith Nakalema’s State House Anti-Corruption Unit, over allegations of mishandling a procurement process for ballots, which led to an inflation of costs by double amounts, thereby causing government losses worth billions of shillings.

However, Nakalema’s report about investigations into their alleged misdeeds is yet to be tabled before the President, since their being in office was impeding the investigations.

Meanwhile, the Commission has since issued a statement refuting allegations that they were fired, stating that they instead tendered in their applications for early retirement, which were consequently approved.