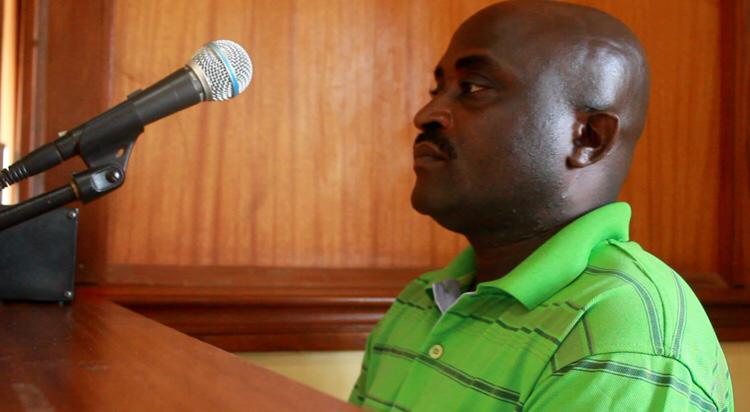 Cpl. David Ssali, a police officer attached to Naggalama police division, has been sentenced to Luzira government prison to serve a 20 years punishment. This was before Justice Henry Kaweesa of Mukono High Court who mentioned the murder case against him..
The final verdict came after the Cpl. Ssali took a plea bargain on the charges against him.
Ssali’s woes stem from the shooting to death of biker Ronald Ssebulime who was trailing former IT minister Aida Nantaba with intentions to assassinate her in March 24, 2019 at Nagojje in Mukono district.
This case was resurrected last month with Kayunga Woman MP Ida Erios Nantaba as the key witness whereby a bike that belonged to the late Ssebulime was brought to court and Nantaba protested the motorcycle saying that some of its parts were manipulated by police CID.
So the case was supposed to be heard today with police officers giving their testimonies in the case but it didn’t happen, instead the suspect took a plea bargain and the judge sent him to Luzira maximum prison to serve his 20 year punishment.
The family members who stormed court in their black T-shirts with words demanding justice for Ssebulime were not satisfied with the final verdict, wondering how could the judge make a final decision without hon. Nantaba being included in the case.
“The years awarded to Cpl. David Ssali is not enough, secondly Nantaba should also be charged because she is the one who gave out false information against our brother that led to his death” said Nakayita Sylvia, sister to the deceased with tears rolling from her eyes.
However, Richard Kumbuga, the defense lawyer, said that he has no objection with Cpl. Ssali’s decision to plead guilty on charges against him.
“I am happy that my client has accepted the offense, it would be a waste of the court’s time yet he knows very well that he committed the crime” Kumbuga stated.
Hon. Aida Nantaba who is a key witness in the same case wondered about the change of dates in the case as she was supposed to appear before the judge tomorrow to give out her testimony again.
“I know they could not stand my testimony. I was going to bring out a lot which the mafias could not stand. So, he pleaded guilty before I could testify, yiii agayaye ago.”
“Police modified the bike, changing the appearance of the exhibits. What was the motive? The state attorney did not want my evidence in court, including the recording, the changed photos of the bike.”