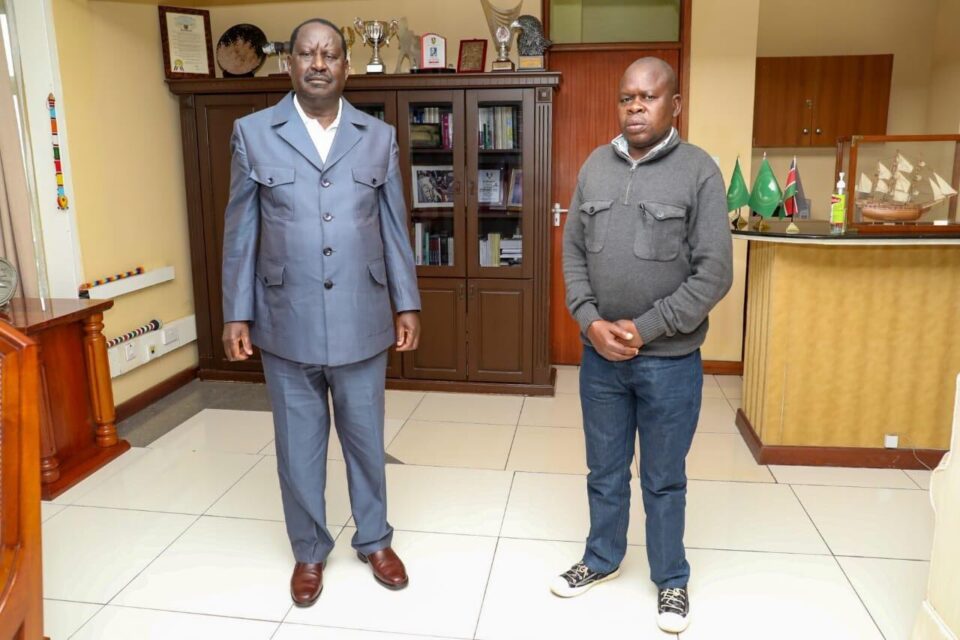 Raila was arrested in 1982 and detained without trial and was released in February 1988 only to be rearrested in September. The ex-premier was incarcerated again in 1989 but released in June 1991 before he fled the country to Norway in October of the same year

The ODM leader fled the country via Lake Victoria where a 19-year-old boat rider ferried him across The Orange Democratic Movement (ODM) leader Raila Odinga has met a man who saved him from the jaws of pro-KANU government police officers in 1991.

Raila whose strong criticism against former president Daniel Moi’s misrule was undeniable, was fleeing the country to Norway.

He had to use Lake Victoria to access Uganda and that is when he met a boat rider who assisted him to escape.

Robert Njura, a resident of Budalangi constituency in Busia, agreed to ferry Raila across the expansive lake into Uganda to escape the perils of the KANU government.Njura who travelled to Nairobi to meet Raila on Tuesday, August 27, 20202, was just 19 and a Form Three student then at Makunda Secondary school when he steered the boat.

The ODM boss described the second encounter as humbling saying the man was a testimony of the energy and focus needed in the youth for a better Kenya.

“Very humbling to meet Robert Njura who steered me in a boat across to safety in Uganda on my way to exile in Norway.

Njura is testimony of what the energy, focus and dedication of the youth can accomplish. God bless him and our youth on this tenth anniversary of our constitution,” he said.

The seasoned politician was looking for a way out of Kenya to Norway to seek political asylum since the government of the day showed no mercy to dissents.

Raila was arrested in 1982 and detained without trial and was released in February 1988 only to be rearrested in September 1988 for his pro-democracy and human rights agitation.

The 75-year-old politician was released in June 1989 only to be incarcerated again in July of the following year together with Kenneth Matiba and Charles Rubia (both deceased).

He was later released in June 1991 and in October, he fled the country to Norway amid indications that the increasingly ruthless government was attempting to assassinate him.In his book The Flame of Freedom, Raila recalled how he got severely sick while at Manyani Prison in 1985.

According to him, the sickness might have been due to some misdiagnosis by a government doctor – one Dr Mwongera had given him some drugs to lower his blood pressure at a time when he was on a hunger strike.

Raila had refused to eat as a way to protest his transfer to Manyani from Shimo la Tewa Prison. He felt that he was receiving extra punishment contrary to the Detention Act.

His encounters with the authoritarian KANU government generated an aura of intrigue about him thus the name Agwambo, the mysterious one, in Luo.