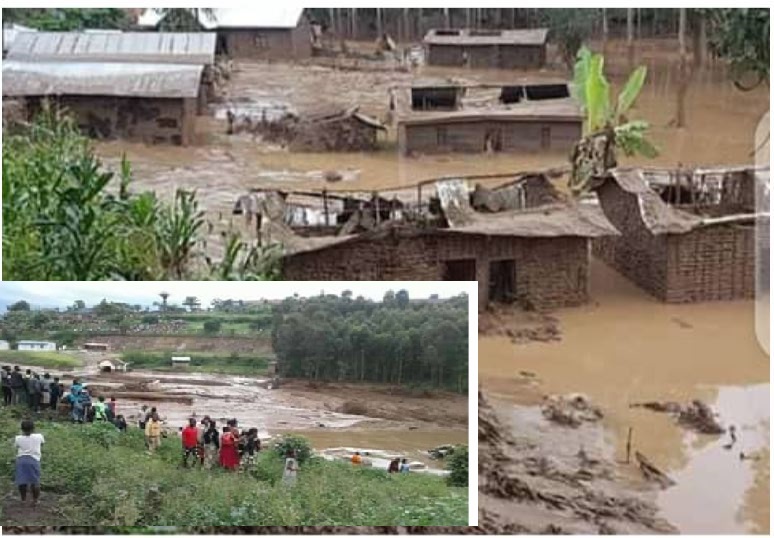 The heavy rains  that  Uganda has received during the first quarter of the year have caused flooding in several parts of the country but the worst his area is Kasese district, where river banks burst, thereby wrecking havoc in several villages, including Kilembe mines, where property worth millions of shillings was destroyed.

So far, one Uganda Peoples Defence Forces (UPDF) soldier  and seven others are reported to have died, with several many missing and property worth millions of shillings destroyed by the floods.

The catastrophe occurred after Rivers Nyamwamba and Thaku overflowed, thereby flooding all areas along their shores,

We have since learnt that traffic between Uganda and DRC was also cut off after the main bridge was submerged by River Thaku, which separates the two countries.

River Thaku burst its banks, forcing hundreds of residents to run for their lives.

Six of those feared dead are residents of Bughabirwa and Kanone villages in Kiraro Parish, Kitholhu Sub-county, while the other two are soldiers who were guarding crossing points on the border.

Sources close to the UPDF said one of the two soldiers was at one of the illegal crossing points about 3kms from the main bride. The source said the other soldier is from the Congolese army who was equally guarding his side of the border.

Two other UPDF soldiers were rescued and later admitted to Bwera hospital in Mpondwe-Lhubiriha Town Council.

Brig Richard Karemire, the UPDF spokesperson, confirmed the incident, saying the army is on rescue mission.

“It is true one of our soldiers was washed away by the heavy waters. Rescue efforts continue,” Brig Karemire said without offering further details.

This is the second time in three weeks that the army is losing one of their own in floods. Another soldier was on May 8 killed when River Semuliki at the border with DRC in Bundibugyo District burst its banks.

According to the Deputy Resident District Commissioner, Mr Joshua Masereka, four of the people killed by landslides are members of the same family. The landslide washed away their home during the downpour at around 8am.

“Four of people who belong to the same family are feared dead. Efforts to retrieve them from the rubbles are ongoing but according to witnesses, the chances of finding them alive are minimal,” Mr Masereka said.

Two others were killed by different landslides in Kanone village in the same sub-county.

Mr Ezakiel Kalemire, a resident of Kinone, said the two men were in different houses when the landslides occurred.