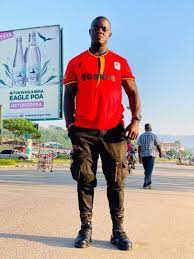 Presidential Candidate Robert Kyagulanyi alias Bobi Wine’s closest friends and his own main bodyguard Kalibala Frank has been knocked dead in Busega allegedly by the Police. Bobi Wine has broken down and cried while sharing the news.

“What a sad day. Kalibala Francis, a personal bodyguard to Hon. Kyagulanyi Ssentamu Robert has been deliberately knocked dead by a military truck No. H4DF 2424 in Busega as we drove from Masaka to Kampala to get further treatment for Kasirye Ashraf, a journalist working with Ghetto media who was shot in the head by police as we headed to Lwengo for our campaigns,” The National Unity Platform posted on it’s official social media pages.

“I regret to announce the death of our security team member Mr Francis Kalibala also known as Frank. Francis was run over by a military police patrol truck Number H4DF 2382 which had blocked us in Busega as we were taking comrade Kasirye Ashraf for emergency medical attention in Rubaga hospital,” he said.

He added that, “Francis past away a few minutes ago in Rubaga hospital. May your life never perish in vain brother. Rest in peace. A very sad day!”