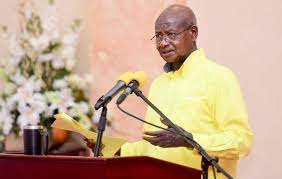 President Yoweri Kaguta Museveni has said that he would rather continue to keep around than hand over power to his former bush war comrades Rtd Col, Dr. Kizza Besigye, Gen. Mugisha Muntu and Lt Gen. Henry Tumukunde because they are useless.

Rukungiri is the home area of Besigye and Tumukunde and a well-known opposition stronghold district. In the 2016 general elections, according to official results, Besigye defeated Museveni in Rukungiri with 58,883 votes against 56,425 votes. Muntu and Tumukunde are standing against Museveni in next year’s general elections while Besigye has previously posed the biggest challenge to Museveni’s presidency in four different elections. Besigye, Muntu and Tumukunde all fought alongside Museveni in the 1981-1986 guerilla war but have since joined the opposition after accusing him of clinging unto power and being a dictator. Museveni said that he is angry at Besigye, Tumukunde and Muntu who also always tell him to step down from power yet they have also done nothing themselves.

“Ugandans and people of Rukungiri here, I want to open a case before you against Besigye, Muntu and Tumukunde because I’m angry at them. Really, am not looking for anything in politics, they only say he [Museveni] should go but I remain silent because they want me to violate laws like Moses in the Bible. They only say he should go, do you think I have nowhere to go? They have done nothing when am here. I push you like a wheelbarrow. I leave Uganda in your hands yet I have already realized that you’re nothing? No. I cannot. Let me remain here, other useful people may come up and I give Uganda to them,” said Museveni.

Museveni wonders why they insist on telling him to go yet they are well aware that he has where to go. Museveni said that his being in politics is not aimed at achieving personal interests as the trio alleges.

Kanungu district NRM chairman who is also Kanungu town council LC3 chairman, Godfrey Karabenda cried out to Museveni over persistent power outages in Kanungu that is crippling business and services. He also requested Museveni to intervene and rehabilitate Kambuga hospital that is currently in a sorry state.

James Ruuji Kaberuka, Kinkiizi West MP asked Museveni to fulfil the pledge of tarmacking tourism roads in Kigezi as a way of boosting the tourism sector.