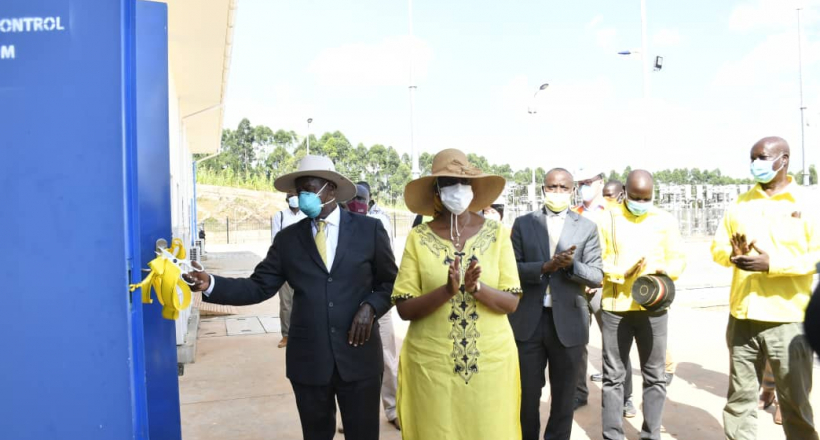 The President, who was accompanied by the First Lady, Janet Museveni, delegates told the guests at the function that as a way of honoring the Electoral Commission directive suspending campaigns, he opted to carry out other state duties like commissioning the sub-station.

“Today I am putting on a suit because they said there is no campaigning.  I don’t hold rallies but it seems the Electoral Commission placed me together with other parties that have been holding them but God is watching. We always have leaders’ meetings and when we meet leaders, we don’t get out. However, since he has ordered, we must obey,” he said.

The President said that by 1986, Owen Falls Dam was supposed to generate 150 megawatts because it had 10 small turbines each producing 15 megawatts.

He, however, noted that only four turbines of the 10 were operational and these producing 60 megawatts, adding that when NRM came to power, they embarked on repairing the dam.

“We started by repairing the old Owen falls dam power station we later named Nalubaale. We repaired it to its original 150 megawatts and also upgraded each turbine from 15 to 18 megawatts to have a total of 180 megawatts,” he said.

“That’s how the economy grew very fast. The 180 megawatts caused a lot of growth in the economy and at one time hit 11% of GDP.”

Museveni said that in 2006, he put his foot down and Parliament accepted his proposal to have funding for electricity and roads, a decision he said has greatly paid off.

“After the 2006 election, I put my foot down and MPs read my mind. They listened to my advice to put more money on roads, electricity. All these things we talk about now are from that decision.”

“Most of these projects like the Mukono- Katosi and the Mukono- Kayunga-Njeru roads are because of this decision and we are continuing with this.”

According to Valentine Katabira, the deputy CEO for Uganda Electricity Transmission Company Limited, the new 183megawatt power sub-station that will serve Mukono industrial park will convert 132kv to 33kvs that can be distributed to the industrial park.

He noted that the sub-station will now address the problem of unreliable power in the industrial park which currently has 75 factories.

The newly commissioned power sub-station in Mbalala, Mukono is part of the NRM government’s efforts to put industrial parks in the various regions around the country.

President Museveni has throughout his campaigns emphasized that the industrial parks will help create over one million jobs.