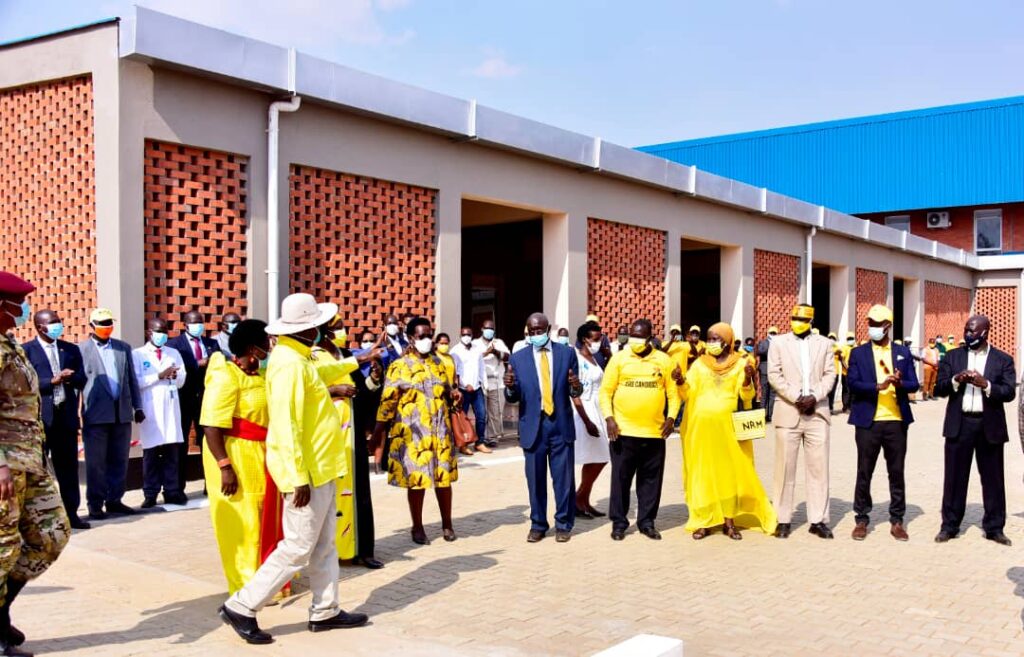 Museveni, who is also NRM party presidential candidate, emphasised the government’s commitment to improve livelihood of the people in West Nile. “People of West Nile thought we were hurling stones at them and yet we were casting meat! You can now see benefits of the NRM government,” said Museveni citing the newly commissioned regional referral hospital, fruit factory and institution in Yumbe. The NRM party chairman called upon leaders to focus on the needs of the people regardless of their race, tribe/ethnicity and religion to create harmony among communities.

“We appreciate launched Pani fruit factory in Ludonga Sub-county. We have the mangoes available with steady supply. We also call for the support of the Aringa cooperative Union to boost their cultivation of the raw-material for the factory to operate at optimal level,” lobbied Hon Huda Oleru Abason, the former Woman Member of Parliament Yumbe District.

Hon. Oleru, who is the currently NRM MP flag-bearer for Aringa East constituency, also petitioned the President to consider the construction of markets in Kei and Kerwa to boost East African trade with DRC and South Sudan.

In response, Museveni welcomed the request whilst lauding the people of Yumbe acknowledging the need for access to market for produce and manufactured products – affirming the great opportunity this presents to the table.

Situated in Pani Village, Nyori Parish, Drajani Subcounty,the UGX8.9bn fruit factory – with a production capacity of five metric tonnes per hour that started in 2015 and was set to be completed in 2016 but later hit a snag over financial constraints. The factory will be processing mainly local mangoes to pulp to be packaged for export. The fruit factory is one of the several other agro-processing and value addition infrastructure that have been established.

Officials in the Ministry of Health further revealed that there is a plan to upgrade 35 Health Centre II’s into HC III’s bringing the total to 331 Health Centre IIIs countrywide.

Uganda is among the largest refugee hosting countries in the world. By February 2016, it was estimated that Uganda was hosting over 510,000 refugees.

Bidibidi Refugee Settlement in Yumbe is home to over 45percent of the refugees from the neighbouring countries of Democratic Republic of Congo and South Sudan.