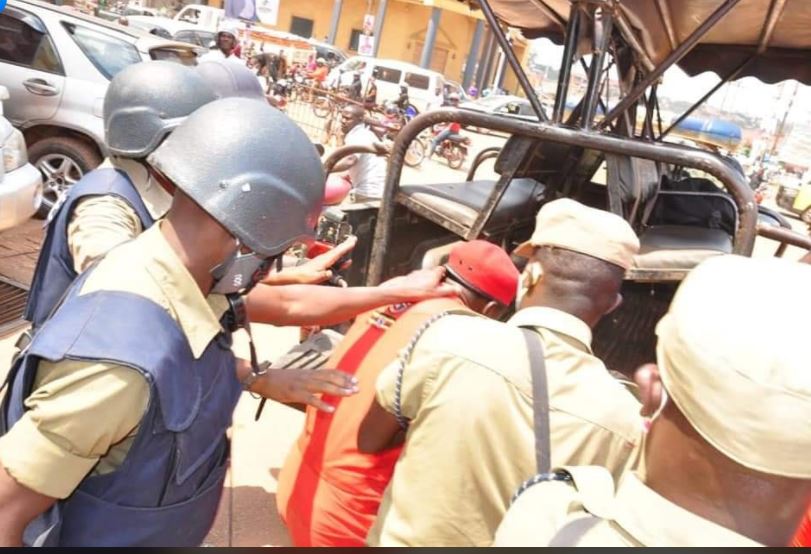 The Police have Thursday arrested over 20 supporters of Kyadondo East Member of  Parliament Robert Kyagulanyi aka Bobi Wine’s supporters from the National Unity Platform (NUP) party, who were staging protests in Kamwokya, a city suburb, demanding the arrest of socialite Olim Charles aka Sipapa.

Bobi Wine’s NUP supporters were protesting against what they called police’s continued brutality and Sipapa’s endless raids on their headquarters in Kamwokya, where they are usually brutalized by the police.

The operation was confirmed by the Kampala Metropolitan Police Spokesperson SP Patrick Onyango, who revealed that at least 20 protesters had been arrested.

A statement issued by Onyango about the multiple arrested reads in part thus; “Today the 17/9/2020 at around 11:30 hours National Unity Platform (People Power) supporters  dressed in their red attire in a group of about 40 mobilized by Mr Fred Nyanzi Sentamu, carried out a procession holding placards demanding  for the arrest of Charles  Olima alias Sipapa for the two incidents of shooting  of the 30th August and 15th September  2020 at their offices at Contafrica zone Kamwokya II Parish  Central Division in Kampala City.

The group blocked the Old Kira Road with logs, burning tyres to prevent any other road user to access it.

According to NUP supporters, they have vowed to continue  demonstrating until Sipapa is arrested.

Over 20 people have been arrested who engaged in the demonstration.

The suspects are being charged with illegal procession.

The suspects’ case files will be processed and submitted to Director of Public Prosecutions.

All tyres used in the demonstration were picked from Nyanzi’s  building.

According to intelligence reports received more tyres are being ferried.

Police has restored order in the area and business has returned to normal.

We want to urge NUP supporters that the government has institutions where they can channel  their grievances other than taking the law in their hands.”