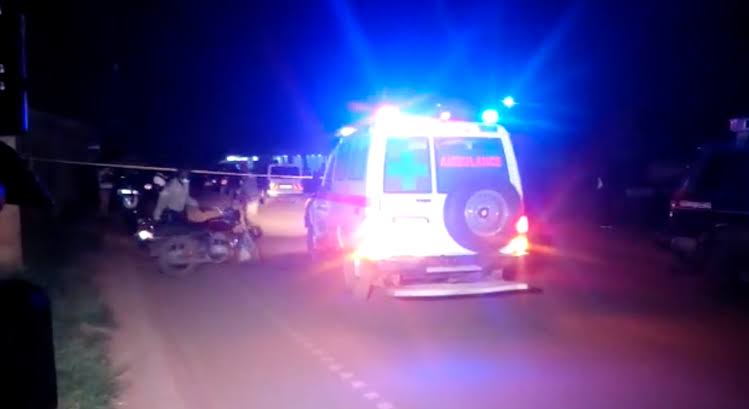 Uganda police have opened up on the bomb blast that caused panic leaving two people dead and several injured in Kampala last night.
Police say they’ve not yet established the cause of the blast that happened at Digida Eating point at 9pm in Komamboga Kawempe division.
According to Fred Enanga, the police’s mouthpiece, the joint bomb squads were sent on ground to document the scene to help determine whether the explosion arose out of an intentional act or not.
Meanwhile Bobi Wine’s National Unity Platform has this afternoon reacted to claims that the man who carried the Komamboga killer bomb wore a People Power shirt.
The news linking NUP/People power to the incident were picked from an eye witness video on a local tv station where a barmaid claimed she saw the man who carried the bomb to the pork joint and was wearing a people power shirt.
This is not the first time Bobi Wine’s group is linked to criminality of that nature, at the height of this year’s general election, NUP was accused in the petrol bomb attacks that rocked the city.
The same was seen recently when the famous Bijambiya Men were terrorizing Masaka residents, Bobi Wine’s NUP was the first to be implicated and even two of their members of parliament Muhammed Ssegirinya of Kawempe North and Allan Ssewanyana of Makindye West are incarcerated in Kigo prison awaiting bail application verdict tomorrow.
In a brief statement posted on their social media platforms, they say it was predicted that the Museveni regime will point fingers at the National Unity Platform for the Komamboga bombing even before investigations are concluded.
“As predicted, the Museveni regime is actualizing their plan of implicating NUP and People Power in terrorism acts. They will do anything possible and go to any extent to achieve their absurd objectives Without contradiction, this new attempt will fail, like all those before”
As predicted, the Museveni regime is actualizing their plan of implicating NUP and People Power in terrorism acts
Few weeks ago Washington and London issued terror threats in Uganda and police urged Uganda