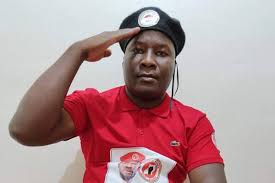 While addressing the media today, Police has today clarified that they don’t have Fred Kajubi Lumbuye in their custody as it was expected following several statements from Hon Okello Oryem
This comes at the backdrop of contradicting information regarding the Turkey based Museveni critic who was reportedly arrested from Istanbul Turkey last week
Lumbuye’s arrest has dominated headlines in Uganda since he was on top of Museveni’s most wanted blogger said to have announced him dead almost a month ago.
On Friday last week the government through the foreign affairs state minister assured the country that Lumbuye and 15 others were enroute to Entebbe after being deported by the Turkish government but his whereabouts remain a mystery two days later.
Fred Enanga said they don’t have Lumbuye, Internal affairs spokesperson Jacob Siminyu and sources at Entebbe airport say they haven’t checked in anyone in the names of Fred Lumbuye, leaving the question of his whereabouts unknown