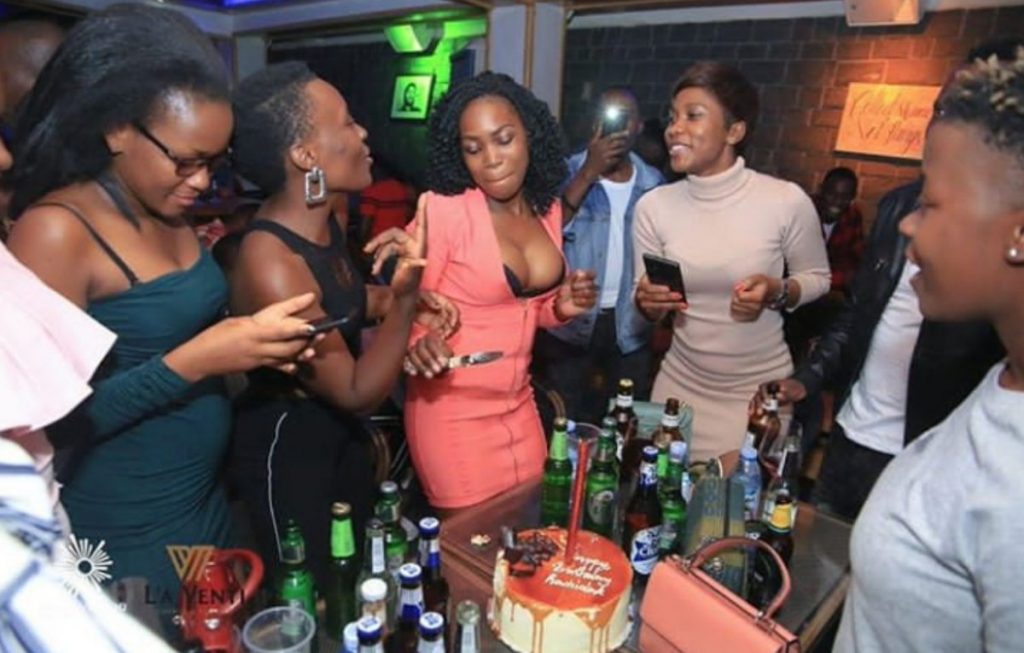 At least 22 partiers were arrested in Najeera, a Kampala suburb on Sunday night, after police raided La Venti Bar and Lounge, although others managed to escape and leave behind their cars.

The cars have since been impounded by the police, until their owners report themselves and explain why they were parked outside a bar on Sunday night, yet all bars and night clubs were closed by the President in a bid to prevent the spread of Coronavirus (COVID-19).

The raid came after police got intelligence that a group of people had gathered at La Venti Bar and were enjoying overnight  merrymaking without any social distancing, wearing masks or other Standard Operating  Procedures (SOPs).

On responding to the tipoff, the police were shocked when they reached the venue to discover  that the partiers were not only in total breach of all COVID-19 presidential directives  but that the operators of the bar had opened it illegally.

The police thus rounded up the whole group, before detaining them at Kira Road Police.

Kampala Metropolitan Police Deputy Spokesperson, Luke Owoyesigyire, said that; “We have been getting information about bars that were stealthily operating and attending to customers while flouting the Ministry of Health guidelines.

During the operation, we managed to arrest 22 suspects from La Venti bar Najera.”

He added that many other revelers fled the scene after seeing police and left behind their vehicles which have since been impounded.

Owoyesigyire also said that; “In a similar operation, Kira Road Police station also arrested and detained the Manager of Cask Lounge at Plot 35 John Babiha (Acacia) Avenue, for operating a bar in violation of the Ministry of Health guidelines.”

According to police, many people are taking advantage of the relaxation of the curfew to move and operate freely especially at night.

“We warn the public against disregarding the Ministry of Health guidelines on the spread of Coronavirus. The suspects are being processed on charges of doing a negligent act likely to cause an infection of a disease,” he cautioned.

Meanwhile, according to a video making rounds on social media, Mbuga organized a birthday party for his wife, Jalia Vivian Mbuga at his home where over 50 people attended the gig.

All the attendants are seen merrymaking without regarding social distance whereas none of them was putting on a face mask.

However, according to a police source who preferred anonymity because he is not authorized to speak to the media, detectives have kicked off investigations into the party and will soon invite Mbuga to record a statement over the matter.

“We have opened up inquiries about this party. The president only permitted weddings which are scientific in nature and not such parties. There is a big problem with celebrities who have been violating the Ministry of Health guidelines by organizing house parties putting their lives and that of their loved ones in danger,” the source told this website.

However, when contacted for a comment about the matter, Owoyesigyire said they are looking into the matter.

“We are aware and we are looking into the matter,”Owoyesigyire said.

Police recently warned members of the public against taking part in house parties because they are against the presidential guidelines put in place to prevent the spread of Coronavirus.

Since March, the country has been through different stages of a national lockdown as preventive measures against the deadly COVID-19 disease were imposed.

Public gatherings were banned and that meant that concerts, bars, gyms and other areas of operation that might require gathering of many people were halted.

After over four months of the lockdown, a few sectors of the economy were opened as citizens got back to work under strict guidelines to follow the Standard Operations Procedures.

However, bars and other hangouts were not opened, however. They remain closed according to President Yoweri Kaguta Museveni’s address made on 21st July 2020.