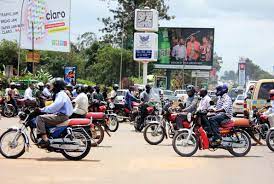 At least 44 motorcycle riders were arrested on Tuesday in Kira Municipality, following an operation by police to clampdown on traffic violators.
Traffic Police PRO Faridah Nampiima said that the operation was conducted by the officer in charge of traffic on Kira road to clamp down motorists who ride without any respect to traffic rules.
“The OC traffic Kira Road conducted a boda boda operation today morning targeting pillion riding and riding without wearing crash helmets,” Nampiima said.
According to the traffic police PRO, 44 riders were arrested.
“Out of these, 38 were issued with (Express Penalty Ticket) EPS tickets, three were warned and three are pending at the station,” Nampiima added.
Some of the riders that spoke to Nile Post complained that they were arrested for other reasons and on reaching the police, they were given a fine to pay in the bank.
Earlier this month, police introduced new measures to curb indiscipline of riders on the road, saying that they were putting the lives of Ugandans in danger.
Nampiima, while announcing the operation said that boda riders who carry more than the recommended one person, and without crash helmets will be targeted.
The operations which were called “Fika Salama” saw at least 40,760 traffic violators arrested and issued with EPS tickets across the country last month of May.