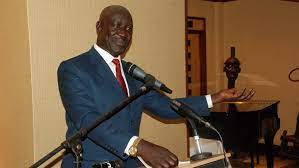 Police in Amuria district have arrested a 39 year old man for slapping the State Minister for Works Musa Ecweru who also doubles as the area MP.
According to the East Kyoga Police spokesperson, Oscar Gregg Ageca, on Sunday, during the morning service at St.Michael Catholic Church in Wera parish, Wera sub-county in Amuria district when Michael Okurut, slapped the minister over unknown reasons.
“Okurut Micheal came before the alter like other congregants, knelt down got his blessings. Afterwards he got up and surprisingly slapped the minister as he was giving his summon,” Ageca said in a statement.
According to police, Okurut was however subdued by the ministers bodyguards who arrested him and later handed him over to the area police.
“No harm was occasioned on the ministers person,” the statement said.
He noted that a case has since been opened at Wera Police station where statements have been recorded and the suspect is detained as inquiries and investigation into the matter is expedited.
The reason behind the violent behaviour by the suspect towards Minister Ecweru is not yet known.
However, last year, Ecweru was involved in an incident in which he together with his bodyguards slapped three clergy men.
In an incident that happened in May 2021, the minister and his bodyguards beat Rev. Simon Peter Olato, the Parish Priest of Wera Church of Uganda and his two lay readers, Benjamin Otasono and Simon Peter Eriku of Aten and St. John churches respectively.
These were beaten and sustained injuries as the minister accused them of encroaching on his land located in Wera Town Council.
Reports then indicated that the incident happened when the minister who was passing by saw the three planting cassava and trees in land belonging to St.John Church of Uganda in Wera and when he asked them why they were tilling his land, slaps started right away before the men of God could even answer.
However, the minister and the clergy men were reconciled .