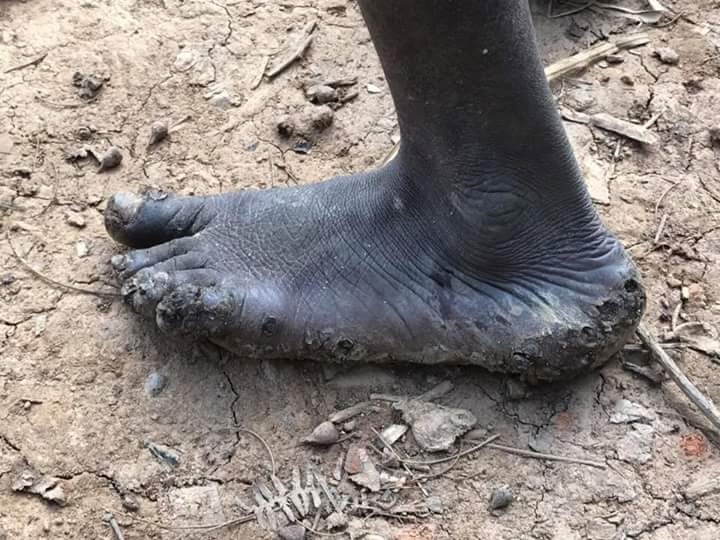 The most affected are Rushebeya, Kateramo, Kempazi among others all in Kikongi parish Bwambara sub-county in Rujumbura country Rukungiri district
John Tumushabe, the Chairperson Lc1 Kateramo Cell in Kikongi Bwambara sub-county Rukungiri District said that he has been receiving such cases from members in his cell.
“I have been receiving complaints about families with people affected by Jiggers. Yes, it’s true we Jiggers in our area” Tumushabe said.

Tumushabe added that ” together with Members of the Village Health Team have sensitized the affected homes about improved hygiene but they have failed to copy with proper sanitation and home cleanliness”
Tumushabe puts the blame on parents who don’t care about their children since they’re the most affected ones.
“Parents are the ones to be blamed for this because they have failed to monitor the hygiene of their children. Some children sleep with dirty (unwashed) feet when their parents are there watching” Tumushabe said.
Annet Kyobutungi a VHT in Rushebeya cell says they have sensitized people about hygiene but the problem persisted, she says entire families have been affected by jiggers which have become a new Normal.“It is becoming Normal, people no longer mind. Some families no longer care about their well being. As a VHT I have done my role of sensitization but people have totally failed to respond to our call and message” Kyobutungi said.

Kyobutungi added that “in some families, people’s feet and toes are in a sorry state and jiggers have started moving upwards towards the up parts of the body.The situation is worsening and it needs quick intervention from the government”

Chris Kagayano, the Bwambara sub- County Chairperson says that he started receiving information from the public about jigger attacks immediately after stepping in as the area chairperson.
Kagayano added that ” we have a team of health workers to the affected areas to give them medical assistance and sensitize the community on ways of preventing themselves from being attacked by Jiggers more”
Geoffrey Kyomukama,, the Rukungiri LC5 Chairperson says the fight against jigger infestation needs collective responsibility from both locals, religious leaders and security agencies orelse it can be a serious problem once fought at an early stage.
Kyomukama now advises the public to ensure sanitation because such illnesses originate from poor sanitation and lack of collaboration within the community.