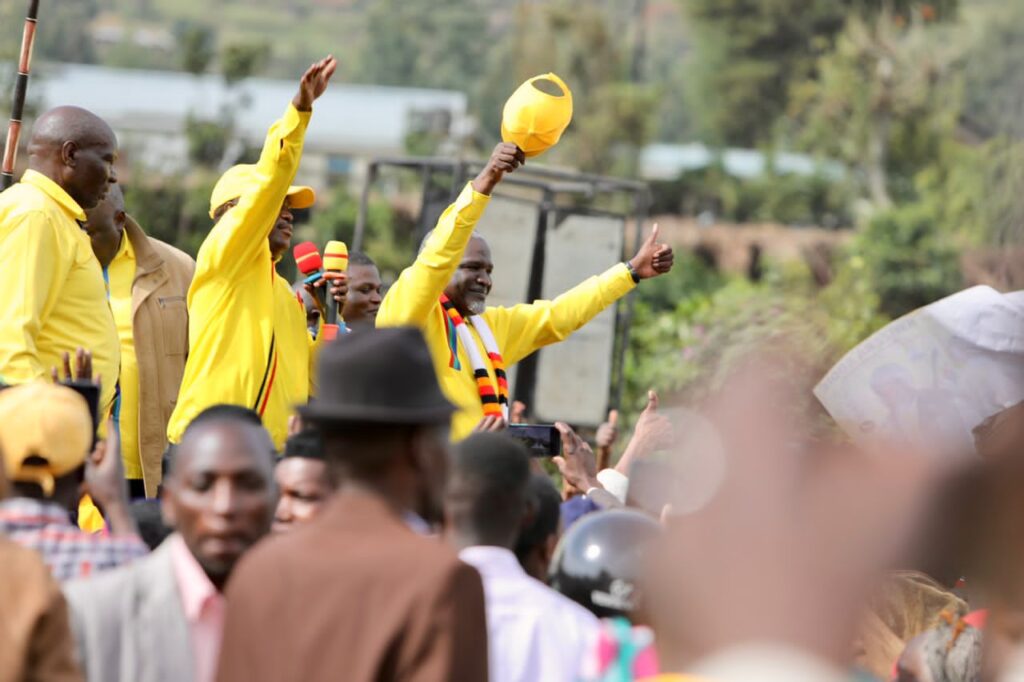 Security was tight at the district headquarters in Kisoro as the Kisoro Electoral Commission finalized the nomination of candidates for the Bukimbiri constituency.
Among the five nominated candidates are Eddie Kwizera NRM, James Owebeyi FDC, Jousua Mutabazi NUP, Edward Mutaabazi IND and Asigalirwe Turyagyenda IND.
Independent Edward Mutabaazi was amongst the nominees for day two and was followed by followed by Eddie Kwizera Wagahungu who also came accompanied by NRM dignitaries including Hajji Moses Kigongo.
However, the 19 year Joshua Mutabaazi of the NUP, the committee ordered him to return with certified papers and identity cards of his seconders.
After being nominated, Joshua expressed concern over the heavy UPDF deployment in Bukimbiri constituency citing that this might a move by the government to scare away NUP supporters in Bukimbiri.
“We need a free and fair campaign was is the use of UPDF yet we have police in the constituency” asked Mutabaazi,
The returning officer Kisoro district Daniel Ayebale, However noted that security is part and partial in elections and they have liaised with only police, he added that UPDF might be on other operations due to the rebel activities at the nearby Congo boarder.
Moses Kigongo NRM’s vice chairman urged Kisoro voters not to be diverted by the disunity amongst the NRM leaders and asked them to support Eddie Kwizera who is good terms with the ruling Party.
Edie Kwizera, while campaigning he urged his supporters to vote for him because he belongs to the ruling National resistance movement where he will be reporting issues to be addressed swiftly, unlike other candidates who are just opposing.
“I appeal to the people Bukimbiri to vote for me because am the gate way to development in the constituency, because when I was previously elected I have caused value to Bukimbiri constituency much as some people don’t appreciate” Kwizera noted.
Dan Ayebale, the head of the electoral commission in Kisoro District, said the registration was completed successfully, but urged candidates to keep peace together and avoid holding rallies in the same places and using insulting language.
“Let’s all candidates observe a peaceful campaigns in these seven days, they should not campaign in the same places and not use abusive languages which might result into fights” Ayebale cautioned