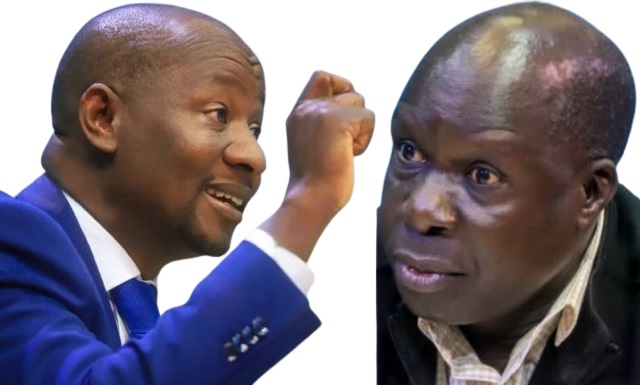 Tanga Odoi on Monday threatened to walk away from a television studio during a debate won the recently concluded Soroti City East by election.
According to results released by Justice Simon Mugenyi Byabakama’s national Electoral Commission, NRM’s Herbert Edmund Ariko beat Moses Okia Attan of the opposition Forum for Democratic Change (FDC) and Pascal Amuriat of the Uganda People’s Congress (UPC).
But the FDC alleges massive ballot staffing and intimidation of its polling agents, among other claims.
So, when Tanga Odoi came to discuss the election on NBS Morning Breeze set that had FDC spokesperson and Kira Municipality MP Ibrahim Ssemujju Nganda, the NRM EC boss threatened to walk out of studio, claiming that Ssemujju’s intention was just to provoke him.
Tanga Odoi said he could not throw Ssemujju out the window but could just leave the show before it ended if the legislator kept provoking him.
“Although I have no right to throw you out, I have a right to walk out of this studio,” said Dr Tanga Odoi, to which Ssemujju replied: “You walk out. You can’t blackmail me. It’s your right to walk out.”
During the same show, the NRM EC boss had confirmed that his children were watching the show, to which Ssemujju stung: “They [Tanga Odoi’s children] must be ashamed of you.”
“I am not here to be annoyed by you [Ssemujju ). I came here because I am your [NBS TV] guest,” said Tanga Odoi.
Ssemujju further submitted that a professor like was allegedly engaged in electoral malpractice, and that, at least according to him, he had stoop as low as the level of Prime Minister Robinah Nabbanja as to defend what happened in Soroti East.
“We were not the only witnesses of what happened in Soroti. The media witnessed it, and the people of Soroti also witnessed it. A professor of Makerere [Dr Tanga Odoi] was seen stuffing ballot boxes,” noted Ssemujju.
“If what Dr Tanga Odoi is saying was being said by Nabbanja, I would go home happy because I know her limitation.”
It should be remembered that Ssemujju Nganda previously said that Nabbanja was not even fit to be the CEO of a garbage collection company. (Read Story Here).
The aftermath of Soroti City East byelection is getting more interesting, especially with the manner in which senior members of the ruling NRM.
Just last week, government spokesperson Ofwono Opondo punched Kampala Lord Mayor Erias Lukwago on live TV.