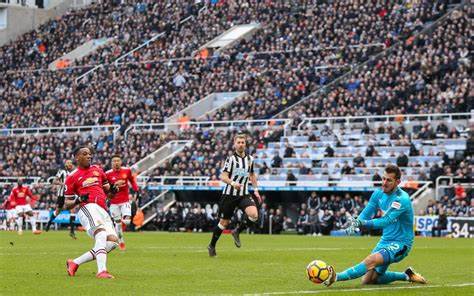 Newcastle fell to a disappointing 4-1 defeat to Manchester United on Saturday evening on a night that began full of promise.

The Magpies looked set to continue their positive start to the season when Luke Shaw steered Emil Krafth’s low cross into his own net.

But the visitors did finally break Newcastle’s resistance when Fernandes got his goal in the 86th minute, before Aaron Wan-Bissaka and Marcus Rashford got on the scoresheet to compound their misery.

That is the current rate of shots Newcastle are allowing per game and if they don’t manage to eradicate those numbers then they could be in for a long season. The last team to have a worse record than that was Sunderland in 2016/17 when they were relegated under David Moyes

Manchester United may not have took the lead until the 86th minute but it wasn’t for the want of trying. The fact the floodgates opened in the final 10 minutes shouldn’t have come as a surprise as Manchester United had 28 shots on goal on the night.

It was the most shots Newcastle have shipped in a game since their fortunate draw against Tottenham. They managed to hang on in North London but they weren’t so lucky on Saturday evening.

Newcastle had two weeks to prepare a gameplan and if it was to nullify the attacking threat of their opponents, it didn’t work.

The Magpies set up with a three-man midfield of Jeff Hendrick, Isaac Hayden and Jonjo Shelvey but they were overrun in the middle of the park.

Newcastle struggled to get a hold of the ball and lacked any control in the midfield battle. Joelinton was anonymous on the right-hand side and Allan Saint-Maximin was crowded out on the left flank. Callum Wilson was isolated up front.

Of course, Newcastle would have expected the visitors to have had the lion’s share of possession but they have to use the ball more effectively when they do get it.

They were dispossessed 11 times compared to Manchester United’s eight. Room for improvement.

Prior to kick-off, the carrot was dangled that Newcastle could have moved second in the Premier League with a win and things were looking rosy when they took the lead inside the first two minutes.

For 21 minutes, Newcastle found themselves in the top two, but after another underwhelming performance it was perhaps fitting that they ended the evening in 11th place.

From Champions League places to mid-table mediocrity. How very Newcastle.

But none were more important than his miraculous save from Wilson in the second half.

Newcastle didn’t create much but Wilson was desperately unlucky not to nab his fifth goal in five Premier League games in the 51st minute.

Saint-Maximin found a rare bit of room on the left-hand side and his cross was met by Wilson’s studs. It looked to be heading into the back of the net only for De Gea to somehow claw the ball away, not only from goal, but also any oncoming Newcastle attackers.

Bruce will be unhappy his side didn’t work De Gea more but, when called upon, the Red Devils goalkeeper came up big when needed.

A victory for Newcastle tonight would have seen them record their best start to a top flight campaign since 2001.

Of course, Sir Bobby Robson’s side went on to secure Champions League qualification that season but the omens were always against them.

The omens were against them, though, as it would have required Manchester United to lose three of their opening four league matches for the first time since 1986.

Defeat also means Bruce has won only one of 25 league and cup matches against Manchester United as a manager.