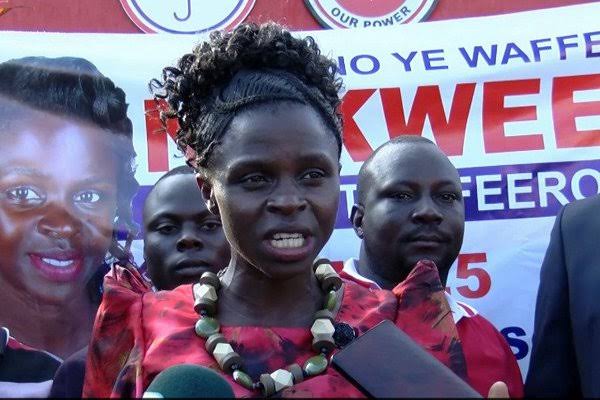 The Opposition National Unity Platform (NUP) has announced it will be challenging in courts of law the results of last week’s Kayunga District Chairperson elections.The party leadership told the press on Monday that they had gathered all evidence in the Declaration of Results (DR) form, as well as tape recordings which they will be showing to the court.

But while addressing press at the NUP Offices in Kampala, Nakweede said her victory was robbed and that Muwonge was only “appointed as the RDC” of Kayunga, and not the duly elected chairperson.
The election, she said, served to “undress the Electoral Commission and the armed forces,” and that next up they would be undressing the Judiciary through the election petition.

“Our work was simple; to go to the people of Kayunga and ask them to vote for us. They turned up in small numbers due to intimidation and they voted for the umbrella,” she said. “Now we have undressed the police, the EC and for the Judiciary, we are coming for you. We want to show your nakedness. We have all the evidence and we are bringing it to you.”

During the press conference, the NUP leaders presented what they called the genuine DR forms from the field, totalling 335, out of total 339 from across the district.
According to Najja Nassif, the Speaker of Wakiso District who headed the NUP coordination team in Kayunga, although there was a lot of ballot stuffing in the morning, in the end their tally put them over 15,000 ahead of the NRM candidate.
“We added our results within two hours using a computer system… and then we went to EC to observe their tallying. We realized that they were simply subtracting votes from us and adding votes to Muwonge.” He claimed
Nonetheless, he says, in the end their candidate still had over 32000 votes and the NRM person had about 26000.
“We even have a recording of the returning officer and if you follow it from when she started reading the results to the end and tally, we are still ahead.
But the results which were ultimately announced at 9am in the morning, Nassif claims, were different from those that were tallied and announced in the room through the night.Even after the declaration, he says the NUP team was not given the final tally sheet.

NUP Secretary General David Rubongoya told press that this (Monday) morning, they wrote to the EC requesting for the tally sheet, but were told that the Commission Offices were closed for Christmas.
However, when reached for a comment, EC Spokesperson Paul Bukenya said it was false that the NUP were denied the final tally sheet.
“I don’t know why they don’t have it but it was issued. It is a public document, and it was issued. It is dated Friday and it is available,” Bukenya said.
On claims that the offices were closed, Bukenya said this too was untrue, because several key staffers including himself and the Secretary were in office.
On his part, NUP President Robert Kyagulanyi Bobi Wine said he was looking forward to “exposing” the Judiciary again, having pulled out of the January Presidential election petition before the Supreme Court.

“This is another opportunity to expose the judiciary the same way it was in January,” he said.
“Owiny-Dollo, we are coming back to you again. They would claim that we didn’t have all the forms in January but here they are now.” “And we are not crying to you to give us justice; we are advising you to spare yourself and your credibility and your legacy. It is you we are giving a favor; take it or leave it,” he said.