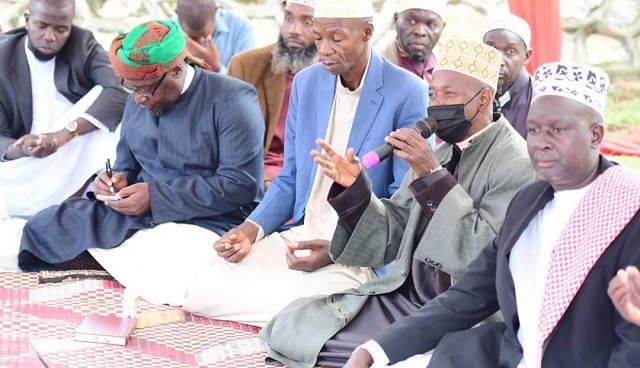 Muslim Leaders at all levels including Regional Assistants to the Mufti, District Kadhis, and College of Sheikhs- Majlis Al Ulaama have been advised to step up their efforts to push for Muslim unity countrywide.

His Eminence Sheikh Shaban Ramadhan Mubaje, the Mufti of Uganda made the appeal during an orientation meeting for Muslim Leaders under the Uganda Muslim Supreme Council-UMSC held in the Conference Hall of the UMSC Headquarters in Old, Kampala Nov 08th, 2022.

Sheikh Mubaje cautioned the Muslim leaders and their followers against some elements within the Muslim community who could be clandestinely working with some hostile anti-Islamic forces especially from abroad to sow discord among the faithful.
“Muslims have been calm recently and engaging in various productive programs until we heard one individual who wants to stabilize them with hateful preaching, which is full of insults purposely to cause unnecessary conflicts. You need to shun such people because they are bound to fail as their predecessors,” Mufti Mubaje remarked.

He used the same meeting to remind the Muslim leaders about their roles in the communities, which include reminding their followers about strengthening family bonds, creating harmony with people of other Religious denominations, being loyal and respectful to legitimate Gov’t Authorities as Almighty Allah ordains in the Glorious Quran and being accommodative to people of all shades of Islamic theological interpretations in order to safeguard unity.
Sheikh Mubaje also implored the leaders to intensify their efforts to recover Muslim properties in the wrong hands in their respective areas and guide their followers to exercise their right in electing good practicing, well-educated, and passionate Muslim leaders towards development in the forthcoming UMSC national elections to take the council to another level.

On his part, the UMSC Secretary General Dr. Ramathan Mugalu took the participants through various achievements made by the council while Mr. Sinan Nsenye, the Acting Secretary for Finance and planning made a presentation on how best resource mobilization could be tackled in the Council structure.
Prof. Muhammad Lubega, the Chairman of Uganda Muslim Professionals crowned the day with a presentation of a well-researched paper tackling various issues on effectiveness in system operations and management such as trusting one another, complementing each other’s strengths, and sharing common goals among many others.
The UMSC Independent Electoral Commission Chairperson Mr. Omar Muhammad Wasswa also briefed the participants on the ongoing processes of the forthcoming UMSC national elections, which are scheduled to commence on Nov 18th, 2022.