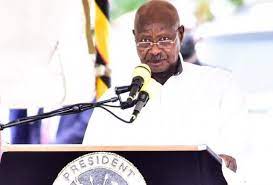 I have been hesitant to comment on the recent state of the nation address by President Museveni, because I know that Ugandans long ago lost interest in his speeches, but I have decided to do so specifically to help my friends in the NRM and other people who still have any hopes in Gen Museveni administration.

His speech was a lamentation on one hand and wishful thinking on the other, it was a recycling of previous speeches on one hand and regurgitating his own words on the other, it was neither an accountability for the trillions of tax payers’ money citizens gave him in the ending financial year neither was it a promise for a bright future amidst the economic crisis that Ugandans are going through.

One would think that the speech was from a leader of opposition speaking and not someone who has been in charge for almost four decades.

Instead of accounting for the previous financial year, which aught to be the essence of a state of the nation address, and having rather presided over a cartel of gangs that have terrorized and plundered our country, Museveni has made it a habit to make his speeches accounts of Luwero war & his overated & exergerated achievements since 1986.

If he is in a journey from Kampala to Gulu which ought to take 6 hours, and by the 5th hour he is still Luwero, Museveni will instead focus on how far he has come from rather than where he should have reached and that explains why he can’t account for a single financial year in such a state of the nation address.

Museveni would have accounted for billions we gave to Dr Musenero a veterinary doctor to construct a factory for Covid 19 vaccines and it was squandered or close to a trillion shillings that was put in Uganda Development Bank and Microfinance support center for stimulus package and it ended to God knows where!

He would have explained to us why his office and residence are taking close to one trillion shillings when Ugandans are sleeping on empty stomachs or rather explained why poverty levels have increased!

He would have explained where 4 trillion borrowed during COVID 19 pandemic to cushion our economy went or why his ministers are ever apologizing due to approving fraudulent payments!

For example, in his lamentations, he talked about the huge foreign market that we haven’t utilized. In the state of nation address of 2021/22, Museveni lamented that Algeria imports 300 billion tons of powdered milk per annum and said that the problem with Ugandan milk was about safety. In this state of the nation address of 2022/23, a year later, he again lamented that Algeria imports milk worth 1.124 billion dollars and said that our problem was lack of vaccines by cattle farmers, so one may ask, what did he do in the last financial year to address the above problem so as to tap into Algeria market or how much has the government allocated in the coming budget to address the problem?
So, shall we again wait for the same lamentations in the next state of the nation address?

In 2021/22 State of the nation address, Museveni lamented about corruption which he said had become a real enemy & promised to defeat it, in this year’s speech he said he knew the thieves who got money from an investor but he couldn’t arrest them because he had no evidence! But this is the same President who warned IGG Beti Kamya over the corrupt because the thieves were investing the loot here. So how can we be sure that he is actually not the one shielding the thieves?

In all the speeches he has been complaining about our negative trade balance with more imports than exports especially on commodities like industrial sugar, wheat, medicine, textiles,fruits, etc, but what solutions has he put in place to address these challenges?

In a nutshell, Gen Museveni is tired and old, Ugandans need to relieve him of his duties to save him from destroying our country further!

the author is a member of the Alliance for National Transformation