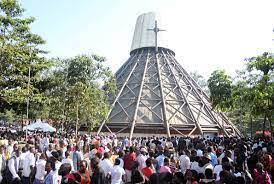 In 2018, Tororo Ecclesiastical Province which comprises of the Dioceses of Jinja, Kotido, Moroto, Soroti and Tororo was represented by Tororo Archdiocese in organizing the celebrations.

Msgr. John Baptist Kauta has confirmed this saying it was the Bishops’ resolution from the plenary held from June 6 to 10, 2022 at St. Augustine’s Institute Nsambya.

He says that the Tororo Ecclesiastical Province has been left to decide on the particular diocese that is to lead next year’s the Martyrs day celebrations at the Catholic Shrine Namugongo on June 3rd.

Archbishop Emmanuel Obbo of Tororo is expected to announce the diocese to lead the celebrations next year.

Fort Portal Catholic Diocese led this year’s celebrations under theme Baptised and Sent to Witness Christ with Hope and Love.

This annual celebration marks the commemoration of the heroic faith of the Martyrs, both Catholic and Protestant, who were burnt to death on the orders of Kabaka Mwanga II, the then king of Buganda between 1885 and 1887, for refusing to denounce their faith.