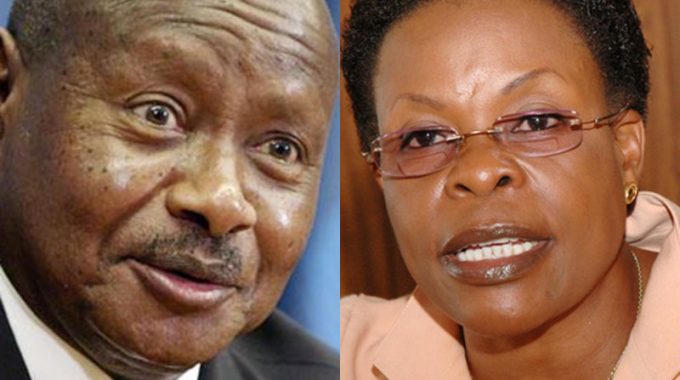 President Yoweri Museveni has summoned the Inspector General of Government (IGG) Beti Kamya and her recent rival Beatrice Byenkya Nyakaisiki over what he terms “war of letters”.
The issues stem from several letters that Byenkya has written to the president through his Principal Private Secretary reporting Kamya for starting trouble.
In a reply to Byenkya however, President Museveni indicated that he has read widely the letters alleging Kamya as the cause of discord but needs some time to consult with his legal team on which of the two people has a legitimate complaint.
Museveni also said Byenkya and Kamya will have to face him at the same time such that he hears first-hand the trading of allegations between both parties.
According to Museveni, Kamya and Byenkya should not be fighting since they are “sisters”. The president also re-echoes his message of cohesion amongst them.
The patchy relationship between Kamya and Byenkya started while the former was Minister of Lands and the latter accused her of interfering in the works of the Uganda Land Commission prompting the mismanagement of the 50 acre- controversial Nakawa-Naguru land.
The two would later clash bitterly while appearing before the Physical Infrastructure Committee of Parliament in 2020. Byenkya, Kamya and her deputy Persis Namuganza have seized her powers and used Shs12.1billion to selectively compensate sic land owners, while the rest were ignored.
Kamya argued that Byenkya could not be consulted because she is a “difficult” person to work with, instead insisting on dealing with the president directly.
Byenkya also accused Kamya of conveniently refusing to work with her only during the Nakawa- Naguru Land compensation matter.
She said she also has directives from the president on the same. This prompted the committee to request copies of the directives from each of them.
However, Kamya would later be transferred from the Minister of Lands and given a new docket as the IGG. The new minister of Lands, Judith Nabakooba reportedly had not had a smooth relationship with Byenkya either.
In October 2021, Nabakoba suspended Byenkya over allegations of abuse of office and general misconduct consequently requesting the IGG Kamya to investigate Byenkya.
The decision by Nabakooba came as music to the ears of Kamya who chanced at the opportunity, hastening Byenkya’s troubles in the jaws of law.
Byenkya’s efforts to stop the interdiction by Kamya did not yield fruit as an injunction lodged in the High Court to halt the interdiction did not come through for her.
In January 2022, Byenkya was arraigned before Anti- Corruption court and charged with obstruction of a search and abuse of office. She was then granted an Shs4m bail (Cash).