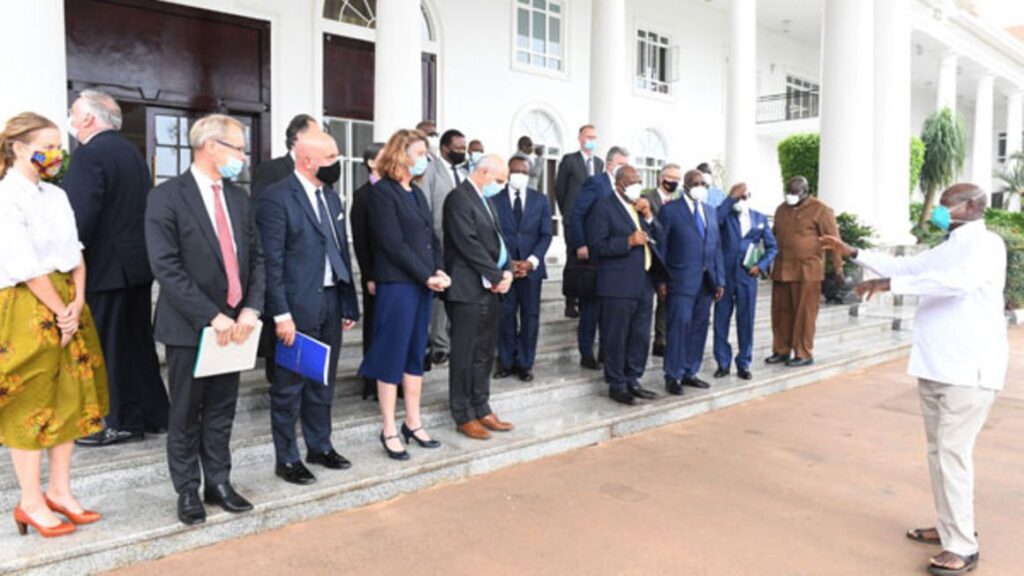 President Museveni has warned European Union envoys to Uganda to stop getting involved in matters they don’t understand.

While Speaking on Thursday at State House Entebbe with EU envoys led by their head of the delegation, Ambassador Attilio Pacifici, Museveni said such interference in the past caused a lot of problems in some African countries.

“By involving yourselves in matters that you don’t understand, even if you do understand, you should not get involved because this kind of misconduct can lead to many serious consequences and suffering of the people like it happened in some African countries,” Museveni said. Museveni’s meeting with the EU comes just a day after Foreign Affairs minister Sam Kutesa responded to the European Union’s parliament’s resolution to sanction Uganda over what they called continued attacks on human and political rights.

The EU delegation in Uganda has also expressed concern over how the recently concluded elections were organized. The ambassadors two weeks ago also met with Robert Kyagulanyi Ssentamu, Museveni’s close challenger in the January 14 general election.

In a statement released by State House, Museveni asked the envoys to always consult with government officials in case they want clarification on any issues.  He promised to share with them a report on the investigations being carried out by security agencies following the November 2020 riots in Kampala and other urban areas which led to the death of more than 54 people.

Museveni said Uganda and the European Union are not adversaries that should work at close purpose but should focus on strengthening their shared goals.bit/lybettingoffersug

“For us, we don’t see you as enemies, remove all the diversions and concentrate on the shared goals and help one another for the prosperity of our people,” Museveni said.

Museveni also expressed reservations about the recent EU parliament resolutions that called for sanctions against Uganda saying even if Uganda signed and ratified different human rights agreements and treaties, it doesn’t take away its sovereignty. Adding that countries should be treated as partners in case there are violations of these agreements and no country should take itself as a supervisor of the other.