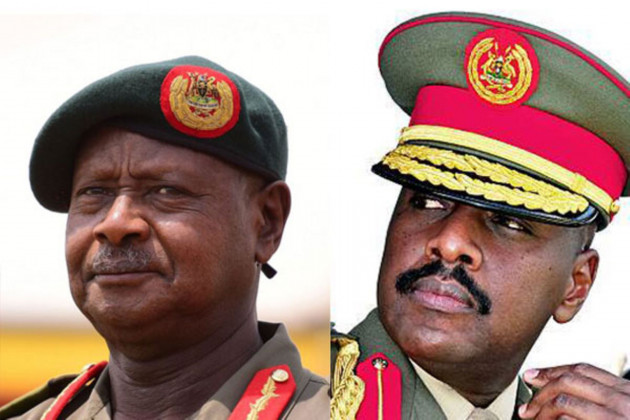 President Yoweri Museveni has sacked First Son Lt Gen Muhoozi Kainerugaba as the commander of Land Forces in the Uganda People’s Defense Force (UPDF).
According to a message on sent out on Tuesday afternoon, Muhoozi will now be replaced by Maj Gen Kayanja Muhanga as the commander Land Forces in the UPDF.
The president however, promoted Muhoozi to full general rank whereas Muhanga was promoted from the rank of Major General to Lieutenant General.
Immediately after the changes, Muhoozi changed his twitter profile to read: Special Presidential Advisor/Special Operations. As special advisor, he will have no clearly defined role within the army.
The changes come after a recent Twitter meltdown by Lt Gen Kainerugaba in which he said he would only need two weeks with his army to capture Kenya’s capital, Nairobi.
“It would take us, my army and me two weeks to capture Nairobi. After we capture Nairobi, where should I live? Westlands? Riverside?” he tweeted
Muhoozi’s promotion to full general could be a softening of the blow. It will be the second time in five years that Museveni is sacking his son from a command position.
In 2017, he dropped Muhoozi as commander of Special Forces Command (SFC).
Muhoozi had earlier hinted in a tweet that there will be changes after he talked to his father.