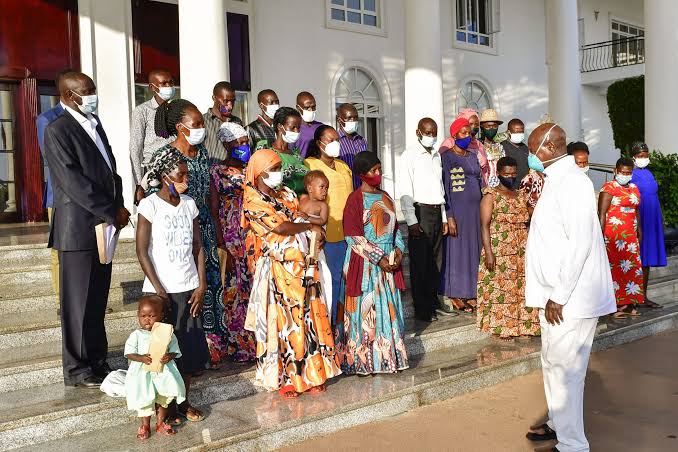 President Yoweri Kaguta Museveni has invited families that lost their relatives in Masaka to Bijabmbiya terrorists to Entebbe State House
In the meeting on Wednesday, the President assured these people that the perpetrators would be brought to book and sanity will prevail thereafter.
He re-echoed the regime’s willingness to fight domestic terrorists and guaranteeing peace and security for its people
26 people have been killing so far mysteriously in Greater Masaka by a group christened “Bijambiya” that is armed with pangas and machetes.
This group, considered by the government as domestic terrorists, tends to send anonymous letters notifying villagers of imminent attack. It raids at night and kills the target.
The letters have since been sent to other parts of the country; Jinja, Bushenyi, Entebbe and Kampala.
In his meeting with the frightened villagers of Masaka who have lost members of their families, the President said some of the killers have already been arrested because they left all sorts of clues security is following.
“Some have been arrested because they left all sorts of clues that we are following. The message to these cowards is that we shall get all of you,” he said
He supported these families with shs 10 million each household
“I met commiserate with families that lost relatives in the senseless attacks by the cowardly pigs being called the Bijambiya gang,”