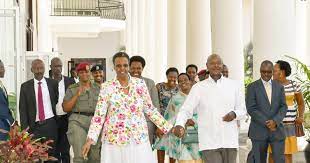 President Yoweri Museveni celebrated his wife, Janet’s birthday on social media.
“I congratulate Maama Janet on reaching 74 years of age, and I thank God for her life,” Museveni said in a message posted on his social media accounts.
The president who is currently in Rwanda for this year’s Commonwealth Heads of Government Meeting(CHOGM) applauded his wife for the love and commitment to God before asking the Almighty to grant her more years of health.
“Thank you Janet, for your love and commitment to God, our family and the people of Uganda. May He grant you many more years of health.”
Born 74 years ago on June 24, 1948, in Ntungamo, Janet Kataaha Museveni has been First Lady since 1986 when the NRM took power after the five-year Luweero bush war.
Her marriage with Museveni has seen the couple blessed with four children; Muhoozi Kainerugaba, Natasha Karugire, Patience Rwabwogo and Diana Kamuntu.
Janet has previously served as the Member of Parliament representing Ruhaama County in Ntungamo district for five years between 2011 and 2016.
She chose not to stand again.
She has previously served as the Minister for Karamoja between 2011 and 2016 before President Museveni appointed her as the Minister for Education and Sports.
President Museveni last year re-appointed Janet as Minister for Education and Sports.
The president last year said he looks forward to celebrating 100 years in marriage with Janet Kataaha.