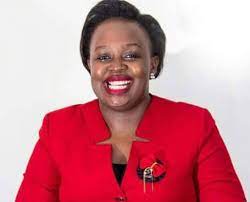 The Court of Appeal has declared former NBS TV journalist, Joyce Bagala Ntwatwa as the duly elected Woman Member of Parliament for Mityana District.
Bagala beat Lands Minister Nabakooba in the January 14 polls for the Mityana Woman MP position prompting the latter to challenge the election in court.
The High Court in Mubende last year ruled that there was voter bribery, multiple voting during the January 14 polls in Mityana committed by Bagala or her agents and consequently the non-compliance with the electoral laws saw the presiding judge order for a fresh election after throwing Bagala out of parliament.
Bagala challenged the same in the Court of Appeal which on Friday morning made a judgement .
In the judgment, a panel of three justices including Geoffrey Kiryabwire, Stephen Musota and Christopher Gashirabake reasoned with Bagala and Electoral Commission’s lawyers that the lower court was wrong to throw her out and order a fresh election.
“Both the quantitative and qualitative tests should have been applied in filing of the non-compliance with electoral laws by Nabakooba. The claimant however didn’t show how the non-compliance would have changed the outcome of the election results,” the justices ruled.
The three justices said that the onus to prove the effect of the said non-compliance on the outcome of the election lay on Nabakooba’s side but noted this was not done.
“The main appeal(by Bagala) is upheld and the decision of the trial court annulling the election of the appellant as Woman Member of Parliament for Mityana District is set aside.”
The court also condemned Nabakooba to costs as Joyce Bagala was confirmed as Mityana Woman MP.