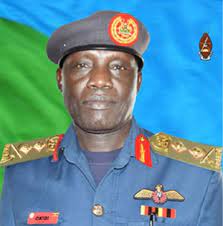 President Museveni, who is also the commander in chief of the armed forces has made several changes in the Uganda People’s Defence Air Forces(UPDAF) in which he appointed Gen Charles Okidi as the overall commander.

According to the changes announced on Monday evening, Okidi who was at the rank of Major General was promoted to the next rank of Lieutenant General before being appointed the UPDAF commander.
The president consequently appointed Lt Gen Charles Lutaaya who has been the Air Force commander as a senior presidential advisor on matters of air force whereas Lt Col Stephen Kiggundu promoted to Brigadier and appointed deputy commander air force , a place which has previously been held by Gen Okidi.

Considered one of the blue eyed boys for President Museveni, Lt Gen Okidi has for a long-time served as a pilot to the president, a role he has served in diligently earning the trust of the commander in chief.
Gen Okidi previously served as the Director Operations at the Air Force headquarters in Entebbe.

In March this year, the president moved Gen Okidi from the position of air force Chief of Staff which he had taken over in 2019 to deputy commander of the UPDAF.

The latest elevation in position comes only eight months since the previous one as the president repays him for his diligent service.

For example by 2019 when he was appointed as the UPDAF Chief of Staff to replace Gen Paul Lokech, he was only at the rank of Colonel but has in just three years since then been promoted three times to the latest rank of Lieutenant General.

The latest changes in the UPDAF come on the backdrop of incidents involving Ugandan choppers in which several people died.

In September, a UPDF Mi-17 helicopter, which is mainly used for transportation, medical evacuation and VIP travel, that had just delivered food consignment to the troops engaged in Operation Shujaa in Eastern DRC tumbled and exploded during take-off.

Several soldiers died on spot whereas others sustained various injuries.

Earlier, another incident saw UPDF chopper suffer an emergency landing in Fort Portal, shortly after taking off from Saaka airfield.

The chopper was however repaired by UPDF engineers and returned to the skies.

Those in the know say the latest changes by the commander in chief could have been informed by the two incidents involving UPDAF choppers.