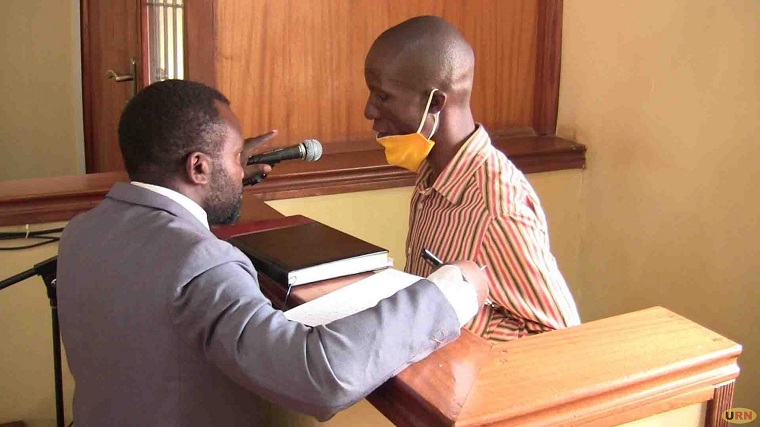 The High court in Mukono has sentenced to life imprisonment, a 45-year-old witch doctor from Kayunga, Muhamad Wamala for the murder of Zulaika Nansamba alias Mirembe.
Wamala on Thursday last week appeared before justice Margret Mutonyi for sentencing. According to the prosecution, in 2017 at Kisoga village, Wamala with malice aforethought murdered Nansamba by hitting her head with a pickaxe. The prosecution relied on a post-mortem report by Dr Sam Kalungi, a pathologist at Mulago National Referral hospital. The pathologist noted that the deceased had a cracked head and succumbed to blunt trauma.
In her judgment, Mutonyi, said that Wamala’s in-law Wilber Ssebuyungo who pleaded guilty to the same offences in 2019 in exchange for a lighter sentence, also implicated him on the murder charges when he testified as a prosecution witness.
In his testimony, Ssebuyungo told court that Wamala and his employee, Jamilu Kimbugwe who is still at large, cut the deceased into two. Wamala pleaded not guilty to the charges with guidance from his then-lawyer, Gastone Kamugisha, Wamala, and proceeded with the full trial.
Although the accused’s lawyer Emmanuel Turyomwe had on Wednesday earlier asked for lenient sentences, which should run concurrently, because his client was remorseful, the judge agreed with the state’s request for life imprisonment.
“There are increasing cases of human trafficking for rituals in the area and one of the victims fell into the trap after being lured by a police officer to the shrine. I, therefore, agree with the state to give the maximum sentence to the accused. This will set an example for all those who might want to engage in the act in the future,” justice Mutonyi ruled.
In 2017, police arrested six witch doctors in connection to the murder of Nansamba whose body was found in a shrine at Kisoga village in Kayunga district. The suspects included Muhammad Wamala alias Vincent Paul, Joseph Kibuuka alias Junior, Isa Walakira alias Joseph, Wilber Ssebuyungo, James Lutwama, and Fred Kizza Ssemanda.
In November 2019, justice Mutonyi acquitted Lutwama and Ssemanda of six counts of murder and aggravated human trafficking. It came after the accused’s lawyers said that they were never mentioned during the cross-examination of Ssebuyungo who changed his plea from not guilty to guilty in a plea bargain session and testified against his accomplices.