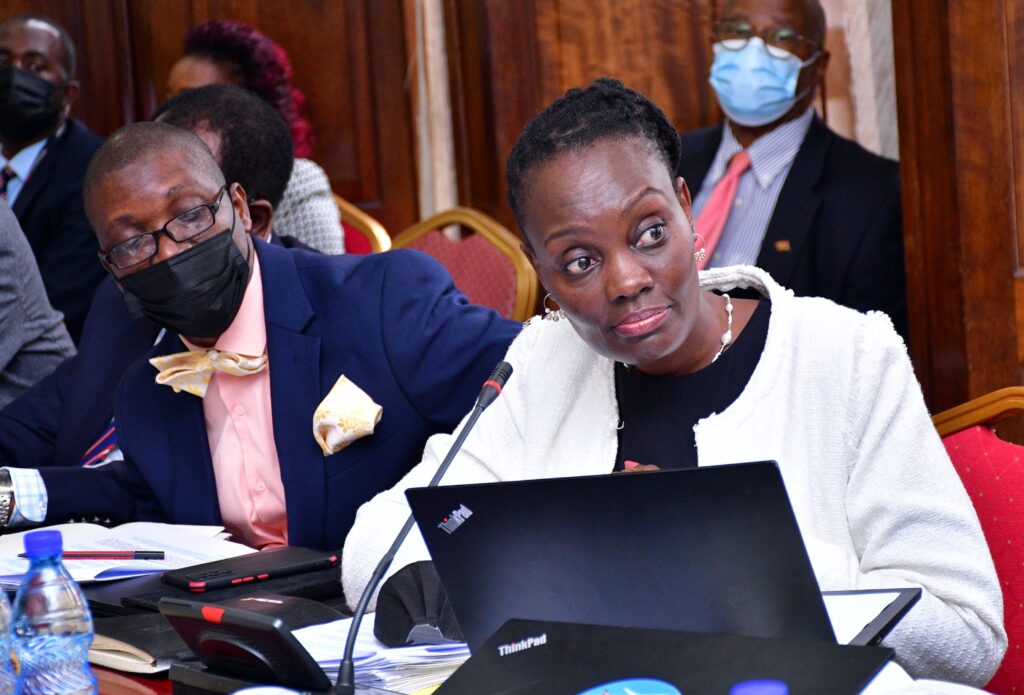 The Chief Executive Officer (CEO) of Uganda Airlines, Jennifer Bamuturaki has said she is qualified and experienced to run the airline.
Bamuturaki was appearing before the Committee on Commissions Statutory Authorities (COSASE) chaired by Nakawa West Member of Parliament, Joel Ssenyonyi on Wednesday, 17 August 2022.
She was accompanied by other officials from the airline to respond to queries in the report of the Auditor General for the year ended 2021.
During the meeting, Bamuturaki was tasked to present her curriculum vitae to ascertain if she met standards before being appointed as CEO of Uganda Airlines.
She told the committee that she is skilled, experienced and qualified and that is seen by her work at the airline.
According to the job requirements and experience as advertised, the ideal candidate should hold a bachelor’s degree in any field and post-graduate training in administration or any other business related course.
It also requires at least 10 years of aviation experience at a senior management level, the experience in marketing and commercial aspects of the airlines business including knowledge of airline commercial systems.
However, MPs state that Bamuturaki holds a Bachelor of Arts (honors) in Social Works and Social Administration which she obtained from Makerere University in 1993 and she lacked the post-graduate training prerequisite.
Ssenyonyi observed that while Bamuturaki had over 12 years of experience in the hotel and hospitality industry, her experience and qualification in aviation is lacking.
Ssenyonyi said that Bamuturaki worked as a guest relations officer and sales manager at Imperial Botanical and Sheraton Hotels respectively before joining East African Airlines and Air Uganda which all collapsed.
“Her highest qualification as of now is a Bachelor’s in Social Works and Social Administration; how comes she was given the job. 40 others who applied perhaps had better qualifications and yet the people she is supervising have masters,” he said.
The MPs then tasked the acting Human Resource Officer, Jane Nanono to explain why they considered hiring Bamuturaki yet she lacked the qualifications.
Nanono however said she cannot comment on the matter as she was not in charge.
She said PriceWaterHouse Coopers developed the job specifications for the CEO and was specific on the experience in the aviation industry which was forwarded to the board of directors for approval.
Buzaaya County MP, Martin Mugabi Muzaale wondered how the airline’s Human Resources Department chose Bamuturaki when she was terminated as the sales and marketing executive at the defunct Air Uganda for alleged non-performance.
However while responding to the MPs, Bamuturaki said that she has 15 years of experience in aviation and is well suited for the job.
She said the experience supported by the certificates obtained from the International Air Transport Association (IATA) makes her a strong CEO for the job.
“The certificates I have from IATA, if you put them together, they will come to a diploma but I have a degree. It doesn’t matter what I did at degree level, but I have the skill and certification from IATA,” Bamuturaki said.
She also told the committee that she is currently pursuing a Master’s degree in Public Administration at Makerere University.
In the same submission, Bamuturaki dismissed reports that she alongside her top ranking counterparts at Uganda Airlines are paid highly.
“I was looking at the wages that were circulated, they were false. That is not what we earn. I for instance don’t even earn 50% of what was presented,” Bamuturaki