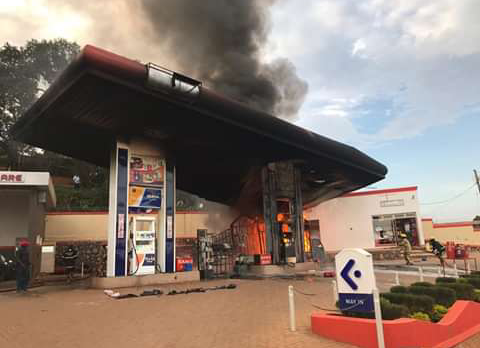 Employees at the station, say the fire broke out around 6 pm on Monday from a Canter truck that was loaded with jerricans that were being filled with fuel for transportation to a landing site.

“The outbreak was a shock to us. We saw the jerricans on top of the truck catching fire before they burst into huge flames, destroying part of the station,” one of the employees told police fire officers at the scene.

Luke Owoyesigyire, the deputy Kampala Metropolitan police spokesperson, says the fire later spread to Sedan vehicle before it was extinguished by fire officers who arrived at the scene in time.  The fire at the pump fuel station comes two days after another fire gutted the main building at Makerere University in wee hours of Sunday morning.