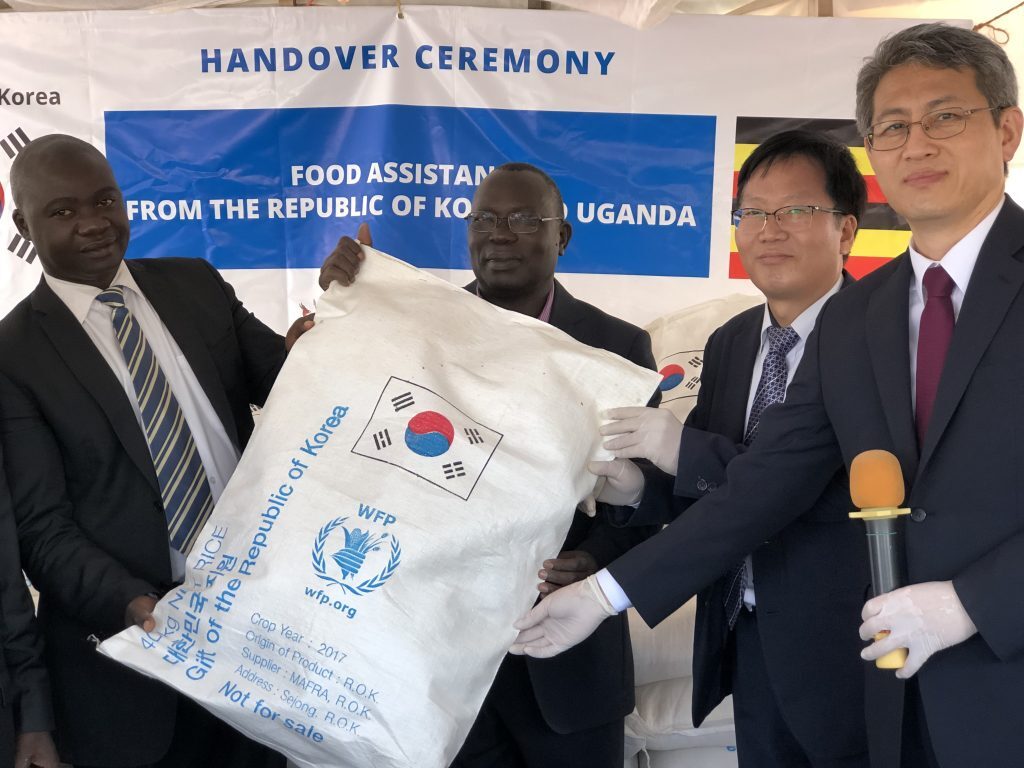 The United Nations World Food Programme (WFP) today welcomed 5,000 metric tonnes of rice and us$3,000,000 in cash from the republic of Korea to provide much needed relief assistance to 781,000 people including refugees and Ugandans threatened by locusts. “WFP is extremely grateful for the continued generosity of the republic of Korea since 2018 and its appreciation of the immense humanitarian needs in Uganda, which were suddenly made even more complicated but COVID-19,” said WFP Officer in Charge Ryan Aderson.

“This contributed of 5,000 metric tons of rice found us at a cross road when we were considering whether to make deeper ratio cuts for refuges because of a shortage of funding, even as we have evidence that they already face high food insecurity,” he added.

Combined with other contributions, the rice may allow WFP to maintain ratios for 1.26 million refugees at the current 70% of a full ratio for a while. Valued at US$4.3 million, it will also meet cereal needs of 614,000 refugees in seven settlements towards the end of the year.

The additional US$300,000 in cash will enable WFP to meet the relief needs of 167,000 people in the north-eastern region of Karamoja, which is the most food -insure region in the country and is threatened by a combination of malnutrition among its residents, locusts, floods and animal diseases.

“The Republic of Korea is committed to supporting vulnerable groups of people in Uganda, especially refugees fleeing conflict and nationals faced by chronic food shortages and malnutrition,” Ambassador Ha Byung-Kyoo.

“we are also very pleased to continue making contributions of rice, which we have heard is appreciated by the refugees and contributes to much needed dietary diversity,” he added.

WFP was forced to reduce ratios to refugees in April to 70% of a full ratio because of funding shortages. The economic pressures thatCOVID-19 has brought on donor capitals has further complicated funding to feed refugees. WFP is putting in place safety measures is 13 refuges settlements to prevent spread of COVID -19 during food and cash distributions.

The republic of Korea has contributed rice to WFP in Uganda annually since 2018 in support of 1.43 million refugees- the highest number of refugees hosted by any country in Africa.

The US$300,00 contribution will also contribute to supporting WFP assistance in Karamoja. Even though families in the region were able to harvest some cross in august, despite repeated sightings of locusts between February and July, the very presence of the pests in the region threatens both agriculture and vegetation needed for animals, relief food helps to cushion families as the government and UN partners work to control the impact of locusts.

The United Nations World Food Programme is the world’s largest humanitarian organisation, saving lives in emergencies, building prosperity and supporting a sustainable future for people recovering from conflict, disasters and the impact of climate change.