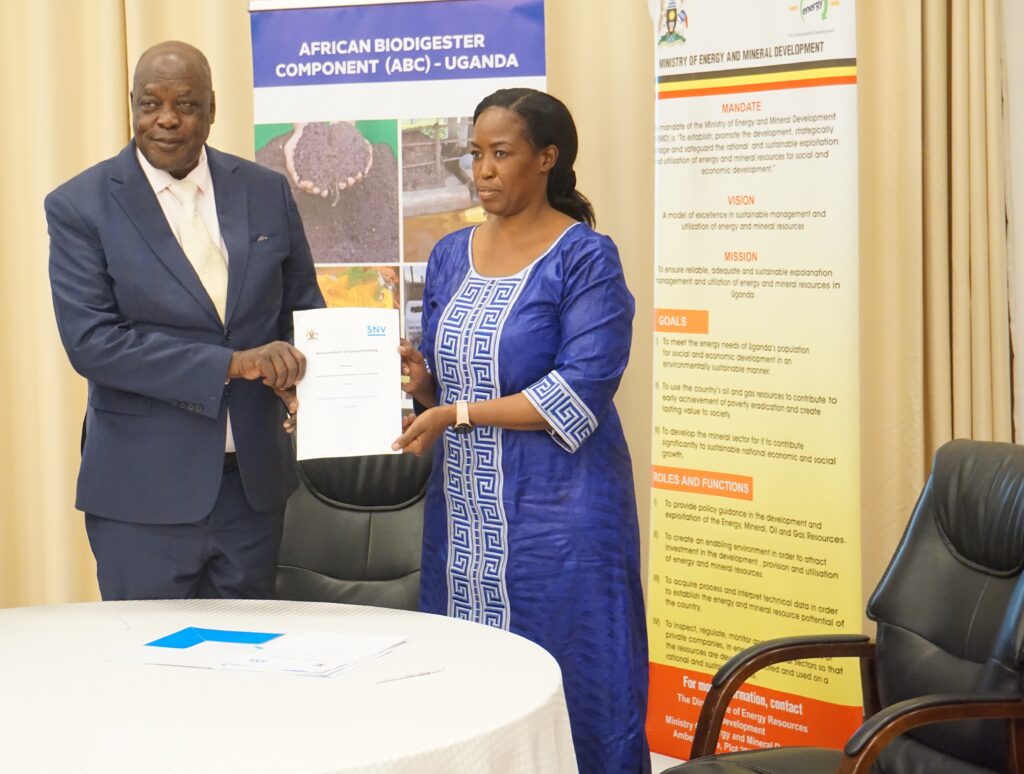 Ministry of Energy and Mineral Development and SNV Netherlands Development
Organisations (SNV) Uganda launched the Africa Biodigester Component
(ABC) project, which aims to boost access to biodigesters for circular agriculture and
renewable energy.
The four-year project running until 2025 is funded by the Netherlands Ministry of Foreign
Affairs and managed by the Netherlands Enterprise Agency (RVO). The 3.7million Euros
project targets the installation of at least 8,000 small scale biodigesters across Uganda,
providing energy access for at least 40,000 people.
Speaking during the launch in Entebbe , SNV Uganda Country Director Phomolo
Maphosa said the energy sector is still dominated by solid biomass, mainly in form of
firewood and charcoal, which contributes 88.6% of the country’s consumable energy.
‘Biodigesters offer increased benefits in the form of clean energy for cooking, and
organic fertilisers for agricultural production, which will mitigate against the effects of
deforestation and soil degradation,’ she said.
Joost van Ettro, Head of Cooperation at the Embassy of the Netherlands in Kampala
highlighted that at the current rate of deforestation, in 25 years Uganda would have very
few trees left.
‘Interventions such as the ABC project are therefore critical if we are to retain our
biodiversity.’
He reaffirmed the commitment of the Netherlands to work with the Government of
Uganda towards this important objective.
ABC Uganda aims to promote the scaling of biodigester technology towards agricultural
value chains, both tangible in terms of increased agricultural production, and more
intangible benefits such as reducing exposure to indoor air pollution, long term soil
improvement, water retention capacity and carbon capture.
To achieve this, the ABC project will adopt information and awareness raising, provision
of Business Development Support to biodigester companies and strengthen the
biodigester business model for end users. Furthermore, the project will support

Government and Sector Institutions developing an Enabling Environment that stimulates
involvement of the private sector.
All these provide communities with renewable energy, agriculture, health, employment
and environment benefits, such as the production of bio-slurry as organic fertiliser, job
creation, improved livelihood, and reduced environmental pollution. The project will
explore commercialisation of bio-slurry as organic fertiliser, to increase farm output as
well as creating new revenue streams for biodigester owners.
In his remarks, Dr Brian Isabirye, representing the Permanent Secretary, Ministry of
Energy and Mineral Development (MEMD) emphasized the importance of the innovationled approach in addition to technology-transfer in bolstering the biodigester market.
‘Political leadership are counting on ABC leadership to provide guidance, support and
evidence to support the government in delivering the much-needed social outcomes’ he
said.
The Guest of honour, Hon Peter Lokeris, State Minister for Mineral Development
appreciated SNV and the ABC consortium for supporting the government’s Biomass
strategy to promote modern technologies for cooking. ‘The project will also reinforce the
government’s initiatives in achieving its National Development Plan (NDP) III targets to
increasing access to clean cooking and reducing the demand for firewood and charcoal,
while creating employment for Ugandans,’ he said.
The project is implemented as a joint effort by a consortium of SNV, German Agency for
International Cooperation (GIZ) and Biogas Solution Uganda Limited (BSUL) in codevelopment support of the Netherlands Enterprise Agency (RVO). SNV, as lead
implementer takes responsibility for overall project management and stakeholder
coordination and in cooperation with BSUL, for the further strengthening of demand and
supply of the sector. GIZ’s vast experience will be put to good use to support key sector
actors to improve the enabling environment for the biodigester sub-sector in Uganda.
About SNV
SNV is a not-for-profit international development organisation working in Food Systems,
Energy and Water. Founded in the Netherlands in 1965, it has built long-term local
presence in more than 25 developing countries in Africa, Asia and Latin America. SNV
has been present in Uganda since 1989 with a country office in Kampala and regional
offices in Arua, Fort Portal, Lira and Mbarara through which donor-funded activities are
implemented in over 100 districts. SNV works with 70 local partners and 90 staff, 96%
of whom are Ugandans. Our long-term on-the-ground presence makes us a trusted
implementing partner. Furthermore, it has enabled us to gain an in-depth understanding
of local dynamics and equipped us with the strong networks needed to facilitate change.
SNV Netherlands Development Organisation
Plot 36 | Luthuli Rise Bugolobi | P.O. Box 8339 Kampala – Uganda
Angelina Wik, Country Communications Uganda
awik@snv.org | www.snv.org/country/uganda