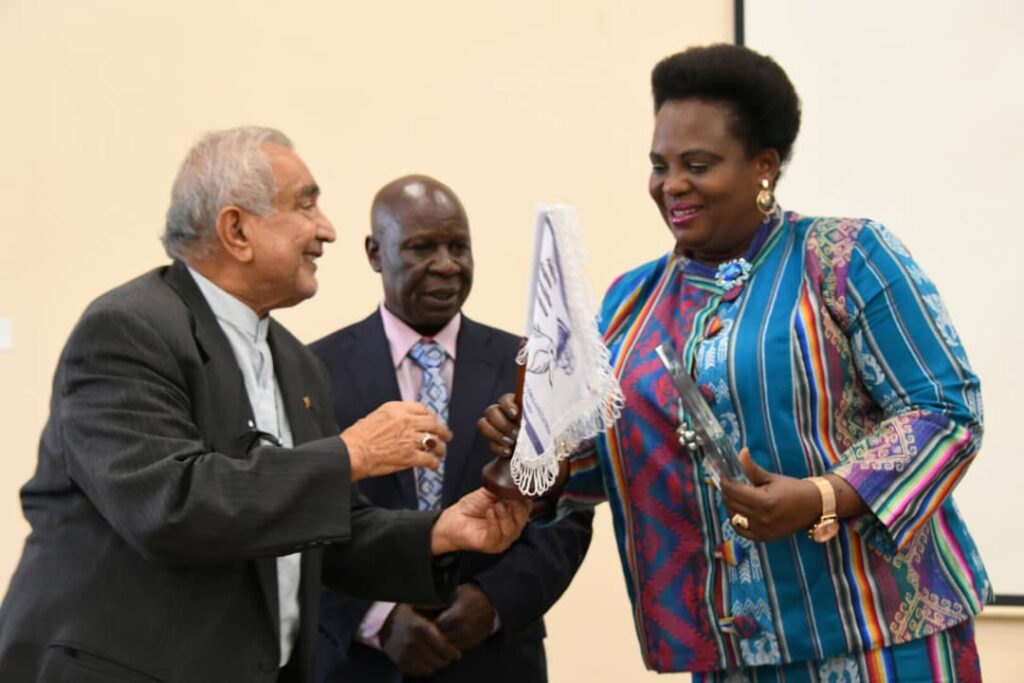 Minister Amongi receives her award from Prof. Syed Abidi of Makerere University.
The Minister for Gender, Labour and Social Development, Hon. Amongi Betty Ongom, has today been honored with a Peace Award in recognition of her exemplary tolerant and reconciliatory approach to performing national duties.
Amongi, who is also the Member of Parliament for Oyam South constituency, was celebrated for being peaceful and understanding in the quest for national development.
“We have tracked her performance and observed that she employs a work method that promotes peace. You will recall that she was determined to bring peace back to northern Uganda during the Peace negotiations and she has carried on with promoting tolerance and reconciliation,” Moses Musana, the Chairman for Always be Tolerant Organisation (ABETO), a non-governmental organization, said.
The award ceremony was held at Protea Hotel in Kampala as part of the activities to mark the United Nations International Day of Tolerance, which is observed around the world every November 16. The day is used to educate people about the need for tolerance in society and to help them understand its negative effects.
In her acceptance speech, Minister Amongi noted that humanity is grounded in diversity along lines of religion, tribes, languages, beliefs, norms and values, among others, which are sometimes brewed into a recipe for intolerance.
“Because of the above, we are faced with so many struggles more than ever. Some groups of people have rode on the back of those aspects to spread messages of intolerance, hate and violence,” Amongi said.
She decried the resulting violent conflicts, internally displaced persons and the refugee crisis.
She underscored the importance of dialogue and positive engagement, promotion of co-existence, stability and unity.
“When we appreciate the above fundamentals, we will spread messages of tolerance with a deeper understanding of other perspectives, respect and promote peace,” She added.
ABETO was formed in 1996 as a non-Government Organisation following a call from her Majesty the Queen of England during the Commonwealth general assembly in 1995 in Harare Zimbabwe. At the assembly, the Queen cited the Rwanda genocide to call for tolerance. Since then the ABETO has promoted tolerance as a key factor for co-existence. The organization has also since extended its scope to the international level.
Among the international awardees of the ABETO Peace Award is former South African President and anti-apartheid activist Nelson Mandela.