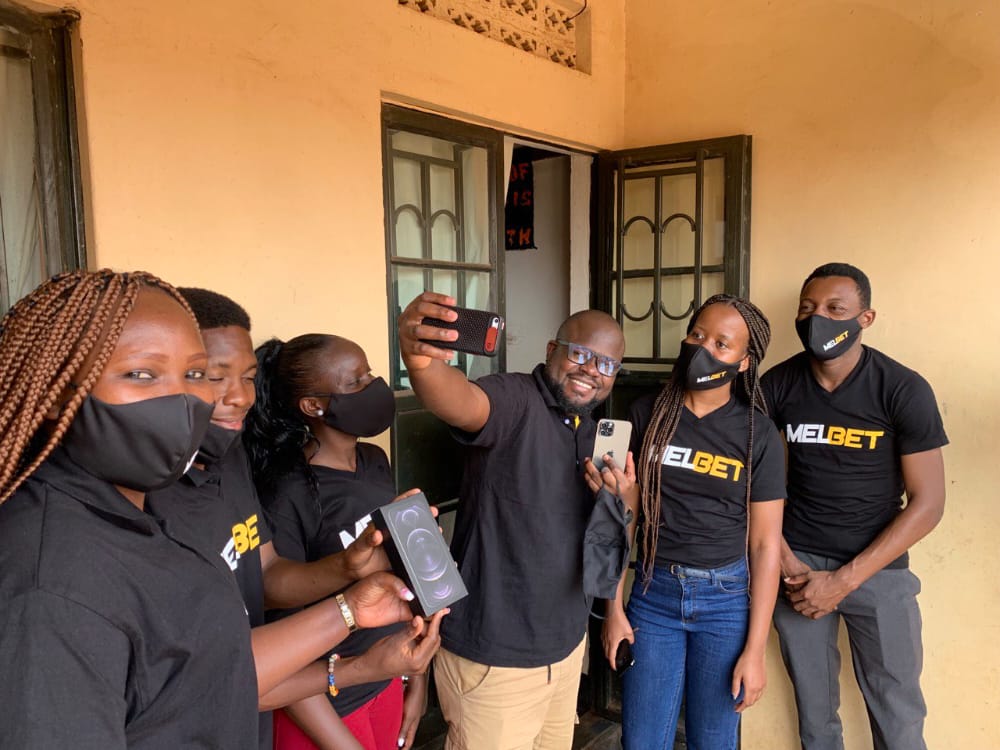 m.melbet.ug has gifted a person with disabilities Mr. Nsubuga Nicholas with an iPhone 12 Pro Max.
Nicholas who cannot speak or hear due to a hearing impairment he has had from a very young age was overjoyed and excited upon being informed by the MelBet Customer Relations team about the gift they had for him.
The organization which had recently learnt of his disability and his passion for football and sports betting decided to visit Nsubuga at his home in Najjera to gift him the iPhone 12 Pro Max and other prizes which included t-shirts and masks.
Nsubuga who communicated through a sign language interpreter to the media and the MelBet team that was present to gift him the phone, says he is passionate about sports, he is a Manchester United fan and SC Villa football fan.
In his remarks, Nsubuga said, “I am very happy and will urge my fellow friends that have the same disability to also play with MelBet and enjoy the endless sports betting entertainment and promotions that the company has to offers.
Nassuna Teopista Sales Manager at Melbet also said, “The phone that Melbet has gifted Nsubuga will further assist him to be able to communicate since he has hearing and speaking disability.”
She continued to say,” Melbet has not only stopped at giving out prizes to Nicholas, but has also gifted two other Ugandans who have won an iPhone 12 pro and Apple air pods respectively. The winners participated in MelBet’s bet and win campaign for the month of July.”
“To stand a chance to be among the monthly winners of the prizes melbet has to offer all Ugandans need to do is visit the site m.melbet.ug and download the app which is found at the bottom of the official melbet website. From there the top 10 most active users in Africa are rewarded prizes which include 3 iPhone 12 phones which are given to the top 3 ranked winners and Apple air pods which are given to the top ranked winners from the 4th to 10th position.”
She concluded by mentioning that Melbet is regulated and licensed by the Uganda National Lotteries and Gaming Board. Betting is not eligible for people under the age of 25 and can be psychological harmful to your mental health.