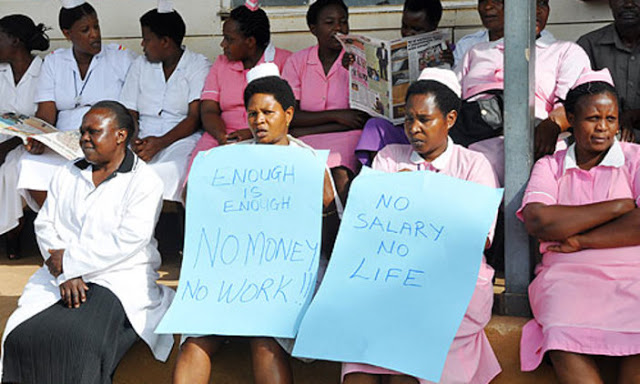 Medical workers in Lira district have gone on strike over unpaid salaries. The more than 124 personnel argue that they have gone for at least three months without pay.
On Thursday morning, the health workers from different facilities abandoned work and stormed the district headquarters demanding an explanation from the district authorities.
The workers failed to meet the LCV chairperson, Chief Administrative Officer, and Human Resource Officer who were not available.
Rashid Mwesigye Etwop, the district entomologist explained that the challenge started in March this year but the Ministry of Public Service responded and they were paid for only a month.
Another health worker who spoke on condition of anonymity says that he has not been paid from May up to date.
Dr. Pius Omach, a medical officer attached to Amach HCIV urged the government to pay their salary arrears. He says that out of desperency, some health workers are acquiring soft loans to feed their families.
The medical workers also asked the district to consider paying their salary arrears with most of them saying they have not been paid in over five months.
But Okello Orik, the LCV chairperson attributed the delays to the Human Capital Management System.
The system was developed to help in the fight against ghost workers and corruption. It captures the data of all civil servants from the day they are enrolled and will be accessible through a phone app dubbed the people’s HR from the play store.
Orik asked the medical workers to return to work saying both CAO and the Human Resource Officers are in Kampala over the matter.