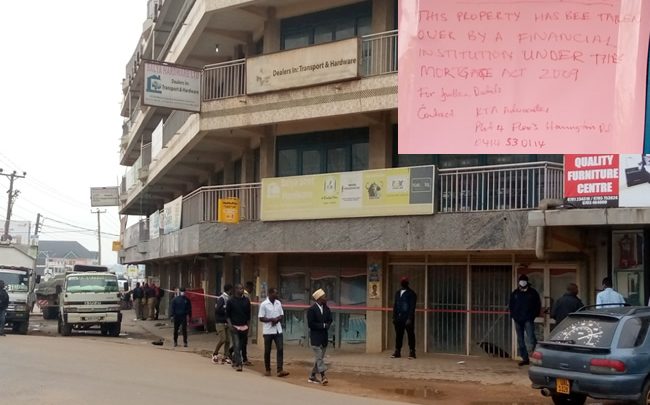 The sons claim that their fathers building was sealed off by mafias without any legal documents.

Two sons of a tycoon in Mbarara City have been arrested following Sunday morning fracas between security guards and “kayanmas”.

Arnold Balya and Ambrose Balya had earlier stormed Balya Mall demanding that Saracen guards allow them to access their father’s building which was taken over by Orient Bank over unpaid debt of sh9bn. The building belongs to Apollo Balya Muhumuza.

Arnold and Ambrose claimed their fathers building was taken over by mafias without any court order.

The police swung into action after Balya men used trailers and other vehicles to block all the roads, cutting off access to Mbarara City.

Saracen guards were deployed by orient bank to guard Balya mall after taking over its possessions last week.

Reports indicate that the bank and Balya had a meeting on Friday and agreed that the tycoon pays the debt in November.

However, the guards were not withdrawn from the building located on the Mbarara -Masaka Road.

Heavily built men then attempted to access the building but were repulsed by the guards, prompting the police to intervene.

The situation normalised after the police removed all vehicles earlier parked in the middle of the roads.