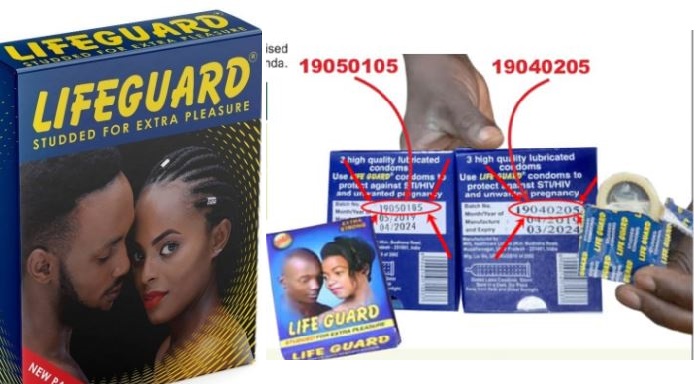 The fight against HIV/AIDS and other Sexually Transmitted Diseases (STDs) in Uganda has  been dealt a huge blow after Marie Stopes, the distributors of Life Guard condoms, decided to rebrand their condoms which were banned by the Ministry of Health a few months ago for being defective.

The Ministry of Health banned the distribution of Life Guard condoms early this year after they were found to be defective by the National Drug Authority (NDA) because many of them had holes and did not conform to the required standards.

Because of distributing the defective Life Guard condoms, many of the victims who had contracted HIV/AIDS and other STDs after using the fake condoms sued Marie Stopes and the National Drug Authority vide case file numner 063 of 2020, of the High Court of Uganda, demanding compensation for  damages as a result of the anguish they suffered.

The hearing of  the Medical Negligence  case, which is before Justice Musa Ssekaana, is slated for January 24th, 2021.

However, even before court pronounces itself on the matter, this website has learnt that Marie Stopes recently rebranded the Life Guard condoms and the company has already started distributing them onto the market again, moreover without clearance from their the Ministry of Health, NDA or court.

Some of the victims who include Kintu Joseph who contracted HIV/AIDS, and Suleiman Balinya, who contracted Gonorrhea, accuse the defendants (Marie Stopes and NDA) of medical negligence and collusion to cause harm.

We have established that Marie Stopes has since rebranded Life Guard condoms and resumed distributing them across the country even after the ministry of Health suspended the same.

Our sources reveal that the victims also filed a Public Interest case against Marie Stopes, NDA and the Attorney General over the same matter that’s coming up for hearing on the 1st of December 2020 before justice Ssekaana.

The aggrieved parties are now wondering why Marie Stopes is rushing to rebrand the condoms before the case is disposed of and what the fate of the defective Life Guard condoms that are presumed to be still on market is.

According to the suit, Kintu and Balinya, through their lawyers of Ojok Advocates, respectively want special damages, general damages and exemplary damages at an interest of 30 percent and costs of the suit due to the anguish they suffered after using the defective Lifeguard condoms.

Kintu claims that in October 1, 2019, he bought a packet of Life Guard condoms batch No 1904205 from a drug shop in Kapeka, Nakaseke District to protect himself against STDs and other related consequences of unprotected sex.

However, the condom broke during the act of sex hence exposing him to unprotected sex.

“Having tested HIV negative twice before; in June and September 2019, I tested HIV positive on November 6, 2019,” Kintu avers in his affidavit before court.

Balinya also states that on October 22, 2019, he bought Life Guard condoms batch number 19050105 from Shifa Pharmacy in Ibanda town which he used that same night but upon completion of the act, he realised that the condom had broken and was leaking.

He claims that being a regular condom user, he retained the other condoms he had not used for future use.

“On October 24, 2019, he felt lots of pain in his (Balinya)’s private parts, went to Ruhooko Health Centre IV In Ibanda for treatment where he was tested and diagnosed with gonorrhoea and put on treatment,” reads in part his affidavit.

Balinya states that he had never been tested or diagnosed with gonorrhoea or any other sexually transmitted infection or disease before the use of the said condoms.

The two men claim that they later found out through the media that the said batch of Life Guard condoms had been recalled by the National Drug Authority (NDA) for being defective and having been illegally distributed by Marie Stopes.

“It was further reported by the Minister of State for Health in her report to Parliament dated November 11, 2019 that the batch of Lifeguard condoms that had been rolled to the public illegally and without following the prescribed procedure by the defendant (Marie Stopes) were tested and analysed by NDA and found defective,” court documents further read in part.

The two men contend that NDA has clarified that the impugned condoms were defective and the importer rolled them on market before they could be tested and analysed.

Court documents state that as a result of the negligent actions of Marie Stopes, Kintu contracted HIV which he inadvertently transmitted to his wife and as a result has suffered mental anguish, inconvenience while Balinya contracted gonorrhea thus suffering immense pain.

It should be noted that early this year the NDA recalled Life Guard Condoms of batches 19040205 and 19050105 manufactured in April and May 2019 with expiry dates for March and April 2024 on grounds that they do not meet market standards.

The affected condoms were manufactured by India-based MHL Healthcare in April 2019 and have an expiry date of April 2024, the government regulator said.

This was after routine post-market surveillance discovered that the condoms were distributed despite failure to comply with the parameters.

Commenting about the matter, Wilberforce Kwiringira, the acting director of laboratory services at NDA, said, that; “We had batches failing tests. Both batches failed the first test. They could not attain the required volume and pressure before they could burst, then one of the batches 19050105 was also found not to be free from holes.”

In the same vein, Victoria Nambasa, the product safety officer at NDA also said that; “The condoms were not free from “holes and burst properties”.

Fred Ssekyana, the Public Relations Officer of the NDA said that they had deployed teams in the field to ensure that all defective condoms are retrieved from the market.

Following the scandal, two officials of Marie Stopes International Uganda were suspended over the release of the substandard Life Guard condoms onto the market, although the matter has since been swept under the carpets of NDA.

The report from NDA about the recalled Life Guard condoms reads in part thus; “National Drug Authority (NDA) found two unauthorised batches of condoms on the market during its routine surveillance. The condoms of the Life Guard brand had failed tests at NDA’s Quality Control Laboratory.

Subsequently, a recall was initiated, and as of 21st November 2019, 70.8% of the consignment had been recovered, and NDA inspectors and the importer are in the field to retrieve the remaining 29.2% of these condoms.

Of the retrieved stock, 46% was destroyed at Luweero Industries Limited, Nakasongola on 31st October, 2019. The additional quantities retrieved are under quarantine awaiting destruction as the recall process from all regions continues.

Investigations regarding unauthorized release of these Life Guard condoms onto the market are ongoing, and any culprits that will be apprehended shall face the law under the provisions of the NDP/A Act.

All Condoms are subjected to mandatory analysis before release on the market. The analysis is carried out at NDA World Health Organisation prequalified Laboratory, which is also accredited by ANAB, USA, to ISO/IEC 17025 Standard. The importer is given a conditional release to quarantine the product until analysis results are provided by the laboratory.

NDA would like to assure Ugandans that the Ministry of Health and all its agencies are committed to ensuring access to safe, efficacious and quality medicines and health care products on the market.”

However, our efforts to secure a comment from Marie Stopes about the matter were futile by press time because they couldn’t be reached through their office lines.